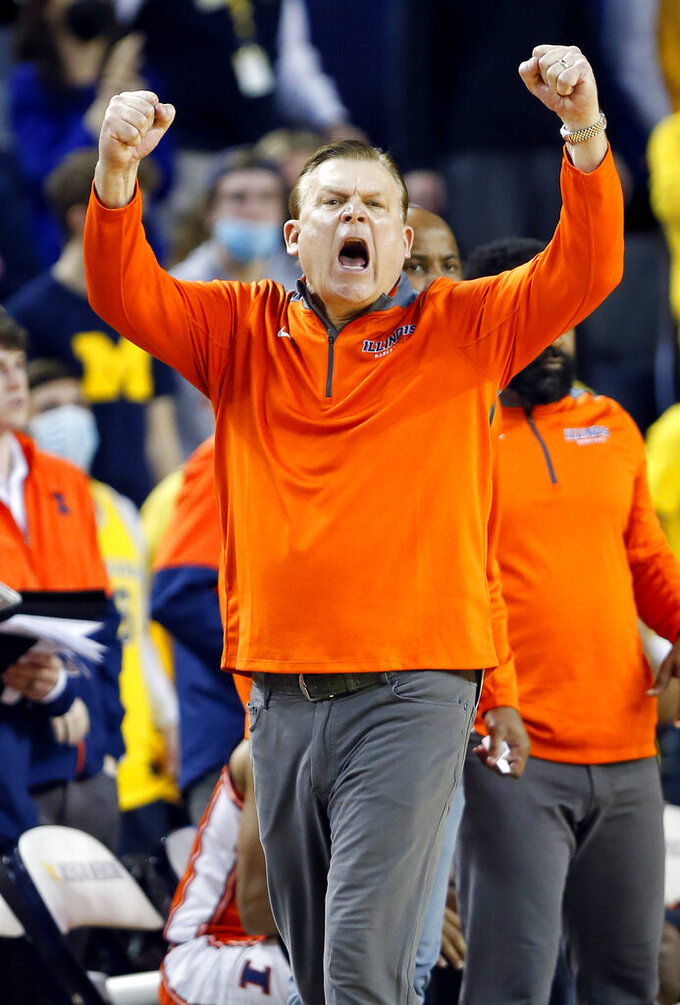 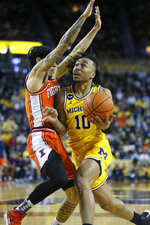 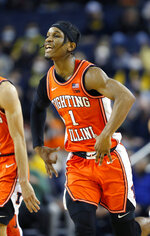 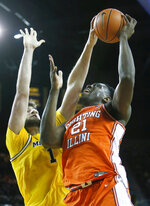 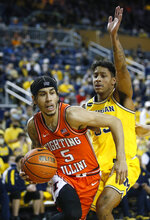 ANN ARBOR, Mich. (AP) — Kofi Cockburn dominated on the inside, as usual, and his teammates provided plenty of offense from the outside.

Plummer was, too, especially in the first half.

“Plummer had as good a first half as I’ve seen any player not named Mike Beasley that I’ve coached,” said Underwood, who was on Kansas State's staff when the former NBA player was at the school. “That was electric.”

The Fighting Illini (20-8, 13-5 Big Ten) led by eight at halftime and were ahead by 15 midway through the second half before the Wolverines (15-12, 9-8) rallied to give themselves a shot at a comeback win.

Trent Frazier made a 3-pointer with 45.2 seconds left — just before the shot clock expired — for a seven-point lead. The win pulled Illinois within a game of Big Ten-leading and 13th-ranked Wisconsin.

Michigan was without suspended coach Juwan Howard, who missed the second of five games for hitting a Wisconsin assistant coach a week ago. Phil Martelli again filled in for Howard.

“We just weren’t good enough and we trailed for 40 minutes,” Martelli said. “And defensively, we seemed to be chasing."

Frazier finished with 17 points and Andre Curbelo scored 12 for the Illini.

DeVante’ Jones had a season-high 25 points and matched a career high with 10 assists for the Wolverines. Houstan scored 21 points, matching the season high he set in his previous game.

Hunter Dickinson had 13 points on 4-of-13 shooting and 11 rebounds, playing in a matchup that he missed last month due to the effects of COVID-19 as Illinois won 68-53 at home.

“Jones played great for them, which is OK,” Underwood said. “We did a really good job on Hunter.”

Michigan's Moussa Diabate and Terrance Williams returned from one-game suspensions, stemming from the melee at Wisconsin. Diabate started and finished with 12 points. Williams did not play in the first half and had two points in four minutes of the second half.

Illinois: After losing three of the previous five games, the Illini put together a strong performance on the road to stay in the Big Ten championship race.

Michigan: The Wolverines have work to do to earn an NCAA Tournament at-large bid with a grueling schedule to end the regular season with four games in an eight-day stretch.

“The fact that we’re on spring break is actually going to help because they can decompress,” Martelli said. “But it’s also a challenge because it’s lonely and there’s no one around.”

Illinois made 71% of its shots in the first half, finishing at 57% shooting, and Michigan connected on 51% of its attempts.

“There wasn’t much defense being played,” Underwood said.

“We don’t have great rim presence,” Martelli said. “I think we’re last in the Big Ten in blocked shots per game. We have to improve on that."

Michigan entered the game 10th in the Big Ten in blocked shots, averaging 2.9 per game.

Plummer had 26 points in his previous game and matched a school record with 8 3-pointers in a loss to Ohio State.

“Plummer has been spectacular,” Underwood said.

The Illini may stay in the same spot in the Top 25 after losing to No. 22 Ohio State by three points and beating Michigan.

Illinois: Finishes the regular season at home against Penn State on Thursday and No. 25 Iowa on Sunday.

Michigan: Closes the regular season, hosting rival Michigan State on Tuesday, the 25th-ranked Hawkeyes on Thursday and playing at No. 22 Ohio State on Sunday.