Colgate returns to NCAAs with win vs. Navy in Patriot finale 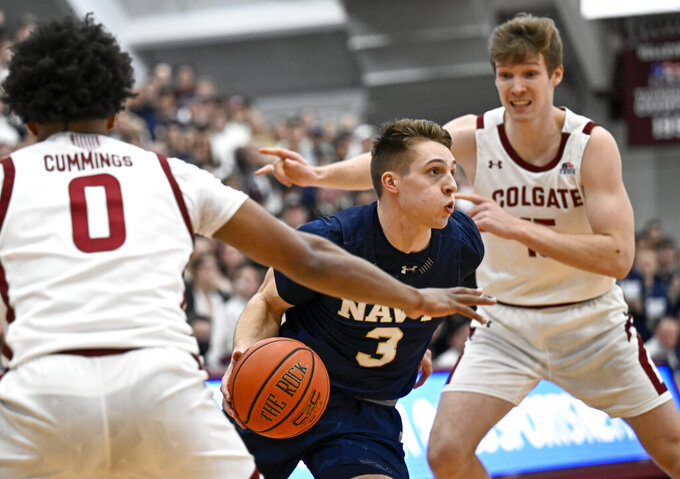 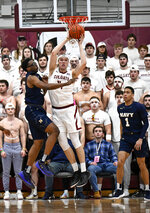 Tucker Richardson scored 12 points as did Jeff Woodward, who grabbed eight rebounds. Oliver Lynch-Daniels added 10 points, all in the first half, for the Raiders (23-11), who won their 15th straight game, the third-longest active win streak in the nation.

Greg Summers had 18 points and eight rebounds, Tyler Nelson added 11 points and John Carter Jr. 10 for the Midshipmen (21-11), who were playing in their first league championship game since 2001.

Colgate led 40-22 at halftime and seemed to have the game well in hand, leading by 22 midway through the second half when Navy went on a 16-0 run led by seven points from Sean Yoder to get within six with six minutes remaining. While the Midshipmen were shooting 5 of 7 the Raiders missed five straight shots and had three turnovers.

Colgate responded by outscoring Navy — which then had its own spate of turnovers plus five straight misses — 14-4 over the the final six minutes.

Now its a return trip to the NCAA tournament

"It's what kids grow up dreaming about myself included," said Colgate coach Matt Langel. “So these guys work tirelessly for that opportunity. They’ve had a little bit of a taste of it before. It’s part of why, you know, a couple of them came back for another run at it and so it’ll be another tremendous experience.”

The teams exchanged baskets to open the game before Colgate went ahead for good. Navy stayed within single digits before Colgate finished the half on a 17-5 run in which five Raiders scored.

Colgate beat the Midshipmen by 19 in their first meeting this season but by only five in the teams' regular-season finale. The Raiders have won seven straight in the series.

The victory was the third in five straight championship game appearances for Colgate.