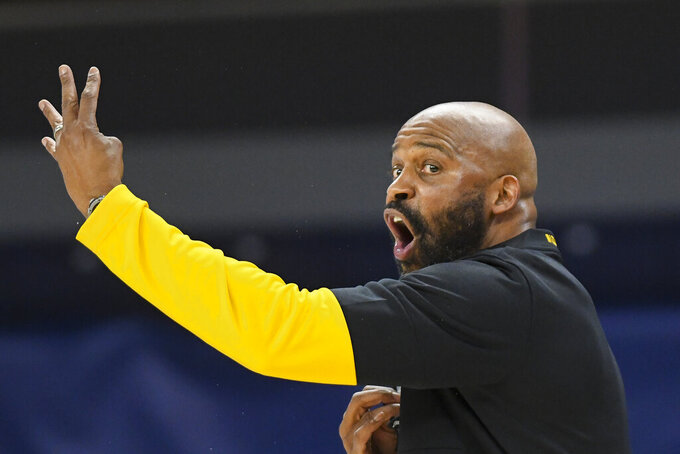 Missouri coach Cuonzo Martin talks to the team from the sideline during the first half of an NCAA college basketball game against Auburn on Tuesday, Jan. 26, 2021, in Auburn, Ala. (AP Photo/Julie Bennett)

AUBURN, Ala. (AP) — Sharife Cooper had 28 points, eight rebounds and seven assists to lead Auburn to an 88-82 win over No. 12 Missouri on Tuesday night.

Cooper, a freshman point guard who missed Auburn’s first 11 contests this season, had his fourth 20-point outing in six career games. Bruce Pearl’s young Tigers, which also got 23 combined points from freshmen forwards JT Thor and Chris Moore, are now 4-2 since Cooper was ruled eligible by the NCAA.

“(Missouri is) one of the top teams in the country,” Cooper said. “It gives you confidence. We feel like we can compete with anybody.”

Auburn (10-7, 4-5 Southeastern Conference) raced out to a 14-point lead early, thanks in large part to some tenacious defense and rebounding.

However, a veteran Missouri team clawed its way back late in the first half, when Cooper was forced to sit because of foul trouble. While Missouri led by as many as seven in the second half, Auburn battled back and took the lead for good with 7:34 left on a floater from Cooper.

“He’s an alpha dog,” Pearl said of Cooper. “He’s the biggest little man out there, period. Everybody knows it.”

“It’s shot selection in timely situations… we were up by seven in the second half by getting the ball inside and moving it,” Missouri head coach Cuonzo Martin said. “Then, all of a sudden, it was a quick shot here, a turnover there, a missed layup there. Those were momentum-killers.”

Missouri: Missouri’s winning streak in SEC play has come to an end at three games. Shooting woes, which were a theme in the previous SEC losses to Tennessee and Mississippi State, popped up again Tuesday. Missouri shot just 38.2 percent from the floor and 24 percent from deep for the game.

Auburn: Although Auburn has self-imposed a postseason ban, it now has a win over a ranked team that it can build on for the rest of the SEC slate. Auburn also showed it could come back and grab a victory after losing an early double-digit lead, something it failed to do last Wednesday in a road loss at Arkansas.

Missouri committed 31 fouls in the game, with Dru Smith, Mark Smith and Xavier Pinson all fouling out. Auburn shot 44 free throws as a team, with 30 of them coming after halftime.

Cooper hit 18 of 21 free-throw attempts in the second half alone.

“I’ll go back and watch film, and I’m not saying that the officials didn’t do a good job,” Martin said. “But 44 free throws is a lot when you’re trying to beat a team on the road.”

Two weeks ago, in a win over Georgia, Auburn became the first team in Division I basketball to have 14 blocks in a single game this season.

Missouri hosts TCU in the Big 12-SEC Challenge on Saturday, the first of three straight home games. Kentucky and Alabama will visit Mizzou Arena next week.

Auburn plays at No. 2 Baylor in the Big 12-SEC Challenge on Saturday. Pearl’s Tigers also played No. 1 Gonzaga away from home earlier this season.