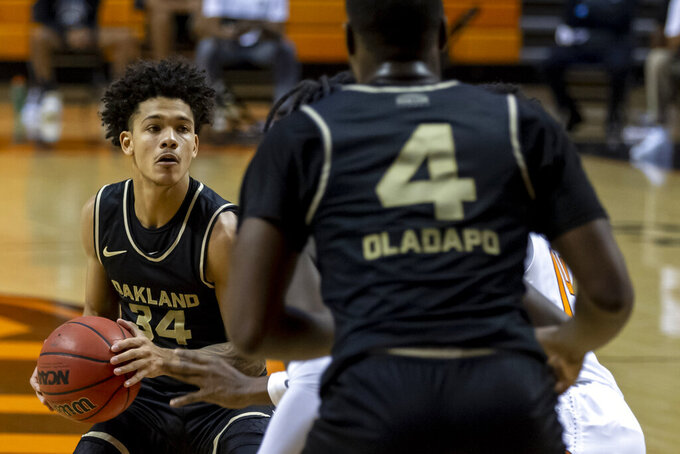 STILLWATER, Okla. (AP) — Cade Cunningham had 18 points and a career-high eight assists, and Oklahoma State pulled away midway through the second half to beat Oakland 84-71 on Saturday night.

Oklahoma State, which forced 24 turnovers in its first big test in a 70-62 road win at Marquette on Tuesday night, got Oakland (0-6) to commit 17 turnovers despite the Grizzlies hitting 17 shots from 3-point range.

But the Cowboys shot well from distance too, hitting 10 of 26 from beyond the arc. Cunningham led with three while Keylan Boone, Bryce Williams and Ferron Flavors Jr. had two apiece.

Cunningham, the first freshman in the program to open his career with a double-double, was 6-of-13 shooting. His dunk was part of a 21-5 run that gave the Cowboys a 77-61 lead with 2:48 to play. Cunningham scored six points during the stretch, and capped the run with an alley-oop to Matthew-Alexander Moncrieffe.

Rashad Williams, a junior guard who led Oakland with 19.5 points per game last season, scored 32 points and made a career-high 10 3-pointers. Jalen Moore added 13 points and three 3-pointers for the Grizzlies.

It was the first meeting between the schools.

Oakland is off to an 0-6 start due in large part to a grueling road trip. The Grizzlies lost to Xavier, Toledo, and Bradley at the Xavier Invitational. The Grizzlies took No. 25 Michigan to overtime before falling, 81-71, and then lost at Purdue 90-53.