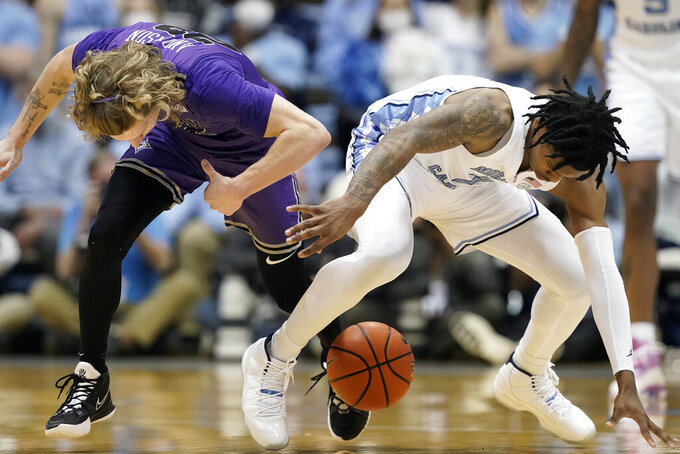 CHAPEL HILL, N.C. (AP) — Dawson Garcia scored 20 points and grabbed a season-high 10 rebounds, Armando Bacot had his sixth double-double of the season and North Carolina pulled away in the second half to be beat Furman 74-61 on Tuesday night.

Bacot finished with 14 points and 12 rebounds. Brady Manek scored 13 points on 6-of-9 shooting and Caleb Love added 10 points for North Carolina (8-2). The Tar Heels have won five games in a row — allowing 63 or fewer over that span after giving up at least 83 points in the previous four.

Bacot threw down back-to-back dunks to spark a 13-2 run that he capped with a pair of layups 22 seconds apart to give the Tar Heels the lead for good and made it 54-43 with 15:51 to play. Furman (7-4) twice trimmed its deficit before RJ Davis made a jumper with 14:29 left and the Paladins trailed by double figures the rest of the way.

Garcia scored the game's first seven points as UNC jumped to an 11-3 lead before the Paladins caught fire. They made eight straight field-goal attempts and finished the first half shooting 15 of 28 (53%) from the field and hitting eight 3-pointers. The Tar Heels outrebounded Furman 21-10, including a 9-1 advantage on the offensive glass, and scored 13 second-chance points before going into halftime tied at 39-all.

UNC is 24-2 all-time against the Paladins, though it was the first meeting between the programs since December 22, 1986.