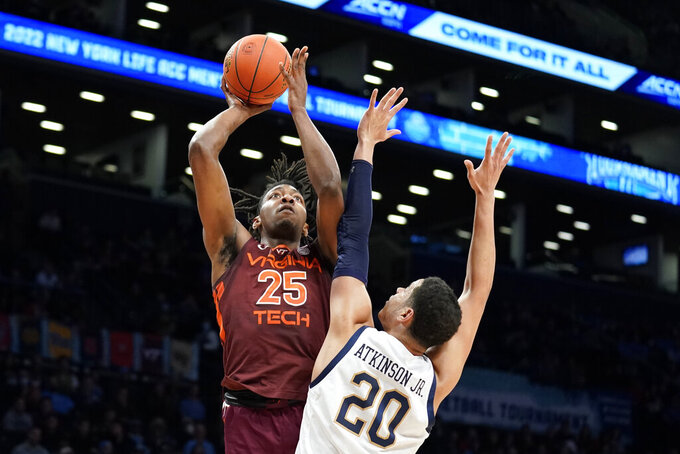 The cast has changed, but Virginia Tech coach Mike Young hopes his Hokies have the pieces in place again to make another statement in the Atlantic Coast Conference.

One year after rebounding from a 2-7 start in conference play to win four games in four days and their first ACC Tournament, prognosticators put the Hokies in the middle of the pack this year, predictably behind all the blue bloods.

Many of their primary players return, led by do-everything Justyn Mutts and sharpshooter Hunter Cattoor, and they landed a significant transfer in 6-foot-9 Grant Basile from Wright State. He averaged 18.4 points and 8.5 rebounds last season as Wright State won the Horizon League championship.

“He’s been coached. He’s skilled. He can really shoot the basketball,” Young said, while allowing that Basile has shown during summer workouts that he has work to do on the defensive end. “Been very pleased with his progress in the early going.”

Mutts was second with a 10.1 scoring average and led the Hokies with 7.4 rpg and 123 assists, and Cattoor emerged as one of the country’s most dangerous long range shooters. He made at least five 3-pointers four times, including nine (in 11 tries) against Florida State and seven (in nine attempts) in the 82-67 ACC championship victory against top-seeded Duke.

Young has frequently pointed to Mutts as key to what the Hokies do, for his leadership and contributions that don’t show up in the box score, and his role will be greater this year. The 6-7 forward doesn’t, however, expect that to change how he plays.

“I don’t feel as though I have any other shoes to fill. I’ve just got to go out there and be me,” he said. “That’s what coach Young tells me every day, so I don’t try to live up to any expectations."

The Hokies always seem undersized but made up for that last year by making 89 more 3-pointers than they allowed, and Cattoor isn’t the only proficient one from long distance. Darrius Maddox made 40 of 79 tries (50.6%), including several critical late-game shots, and Sean Pedulla made 34 of 76 (44.7%). Both will have significantly increased roles.

The ACC is a big step up from the Horizon League, and while Basile is not expected to fill Aluma’s shoes, Young is confident his arrival from the transfer portal will give the Hokies the down-low presence they need.

“They don’t all fit,” Young said of transfers, “but we thought he did.”

Young said he likes hearing talk of last year’s “magic carpet ride,” but there comes a time when it’s time to look ahead while remembering how you accomplished the unexpected.

“It was not blue skies and smooth waters through a lot of that time, but when it mattered most, they stayed the course. They hung in there," he said.

The Hokies were picked to finish seventh in a preseason poll of media; they were the seventh seed when they won the ACC tournament. ... Basile’s Wright State team’s victory in the Horizon League championship came by an 82-67 score against Oakland, the same score of the Hokies’ ACC title game victory against Duke.

The Hokies could face two Big Ten schools early with a possible matchup with Penn State at a tournament in Charleston, South Carolina before Thanksgiving and a visit from Minnesota in the ACC/Big Ten Challenge on Nov. 28. Their lone game with No. 1 North Carolina will be at the Cassell on Dec. 4, and No. 24 Dayton visits three days later. Home-and-home series in conference include No. 7 Duke and No. 18 Virginia.