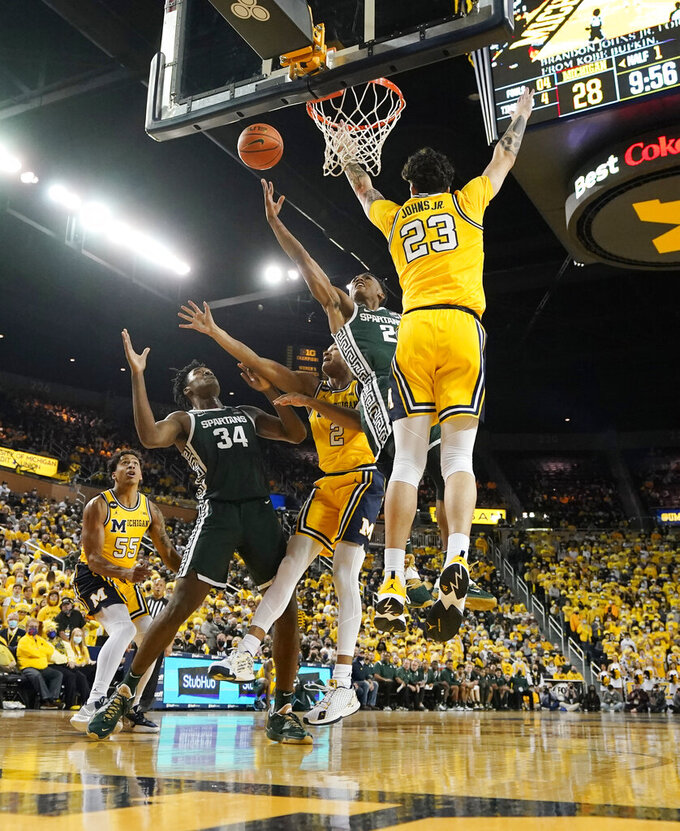 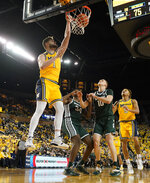 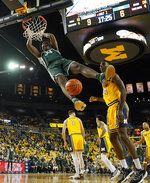 The Wolverines moved into a three-way tie with the Michigan State and Rutgers for sixth in the conference standings - a game behind No. 23 Ohio State and No. 24 Iowa, which are tied for fourth. The top-four seeds earn a double-bye into the quarterfinals of next week’s Big Ten tournament.

Houstan was fouled on a 3-point shot and hit all three free throws to give Michigan the lead for good and spark a 14-0 run, capped when Dickinson scored inside about 3 1/2 minutes later to make it 23-11, with 13 minutes left in the first half. Dickinson scored six points, Diabate threw down a dunk, and Terrance Williams II's 3-pointer capped an 11-2 spurt that gave the Wolverines an 18-point lead about a minute before the break. Michigan State trailed by double figures the rest of the way.

“I’m mad. I wanted to win as much as anybody,” said Brown, who attended nearby Belleville High School. “This was a home game for me.”

The Wolverines were without coach Juwan Howard, who served the third of a five-game suspension for hitting Wisconsin assistant coach Joe Krabbenhoft after the Badgers beat Michigan 77-63 on Feb. 20.

“I know he’s going a little crazy in the house,” Dickinson said of Howard.

The Spartans have lost four of their last five with their lone win in that stretch coming last Saturday over No. 4 Purdue, 68-65.

The win over the Boilermakers propelled Michigan State coach Tom Izzo into a tie for most overall wins by a Big Ten coach with at least 10 years in the conference. Former Indiana coach Bob Knight won 662 games in 29 years in Bloomington (662-240, .734) and Izzo has a career record of 662-262 (.716). Knight is the all-time leader for Big Ten Conference wins (353), with Izzo second at 321.

The Wolverines remain home to play Iowa on Wednesday before wrapping up the regular season Sunday at Ohio State — the last for four games, three against ranked opponents, in eight days.

“It’s tough, but whatever it takes at this point,” Dickinson said of Michigan's schedule.