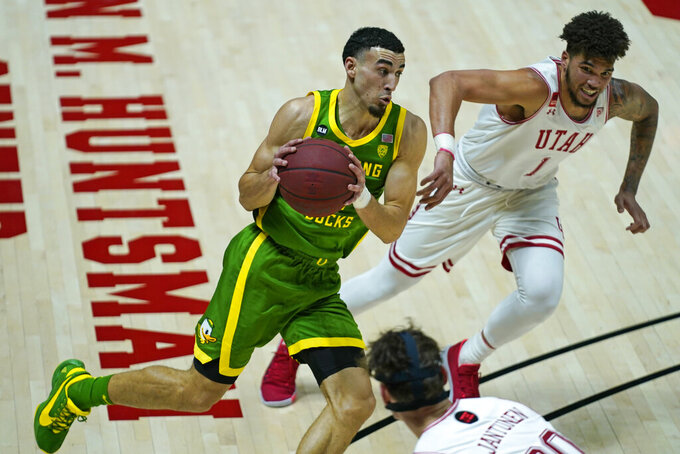 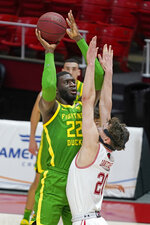 LJ Figueroa scored 15 points for the Ducks (9-2, 41 Pac-12) before exiting late in the second half with an apparent leg injury. Amauri Hardy added 13. Oregon beat Utah for the 18th time in the last 20 games between the two schools.

Timmy Allen scored 23 points and Mikael Jantunen added a career-high 20 points to lead the Utes (4-4, 1-3). Pelle Larsson had 15 points, five rebounds, and five assists before fouling out in the final minute.

Utah shot 57% from the field but could not overcome 18 turnovers. Oregon scored 25 points off those turnovers.

The Utes’ last chance to pull an upset came when Riley Battin buried a 3-pointer to cut Oregon’s lead to 70-68 with 1:40 left. Chandler Lawson answered with a layup on the other end and the Ducks made seven free throws in the final minute to close out a hard-fought win.

Utah executed flawlessly on offense for large stretches of the first half. The Utes employed a combination of great ball movement, precision passing, and accurate shooting to keep Oregon on its heels.

The Utes made 10 consecutive shots over the final 6 1/2 minutes before halftime to carve out a 10-point lead on the Ducks. As a team, Utah shot 67% from the floor during the first half and recorded 13 assists on 18 baskets.

Allen supplied the biggest spark, totaling 17 points on 8-of-10 shooting in the first half. After Oregon went up 25-22 on a 3-pointer from Duarte, the Utes did not miss another field goal attempt before halftime. Allen scored three straight layups to light a fire under the rest of his team. He totaled five baskets during a 21-8 run over the final 5:20 of the first half that helped Utah take a 43-33 lead.

Oregon opened the second half by scoring baskets off three consecutive Utah turnovers. It helped the Ducks quickly erase the double-digit halftime deficit. Oregon finally climbed back ahead following a 3-point play from Hardy for a 50-48 lead.

Oregon: The Ducks overcame hot shooting from Utah by forcing a flurry of turnovers and avoided going 0-2 on their Rocky Mountain road trip.

Utah: The Utes cooked on offense in the first half. They ran out of steam down the stretch after making too many mistakes on critical possessions.