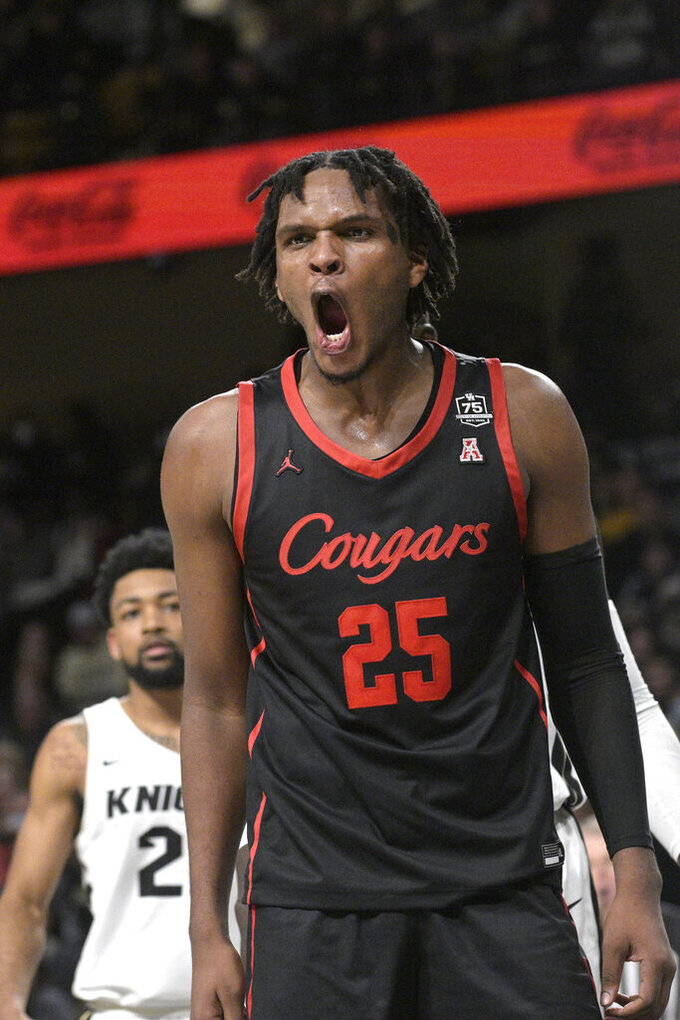 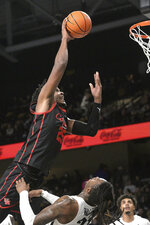 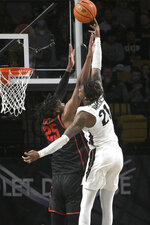 ORLANDO, Fla. (AP) — Houston Cougars coach Kelvin Sampson said the thing that separates his team from many others is the squad’s willingness to defend at a high level even when shots aren’t falling.

On Saturday night, the No. 7 Cougars were able to overcome a shaky offensive performance by riding their stellar defense to a 63-49 defeat of UCF.

“Last year’s team went 28-4, and more often than not, defense is why that team got to the Final Four. This year’s team had to buy into that,” said Sampson, whose Cougars held UCF to 34.6 percent shooting and a season-low 49 points. “I tell people all the time, it’s not hard to get talent because you can get good players. But it’s about getting kids to play for something bigger than themselves, and that’s what the defense is for us.”

Kyler Edwards scored 13 of his 17 points in the first half and Josh Carlton added 13 points and 15 rebounds as Houston won its 10th straight game. Houston (18-2, 7-0) rallied from an early nine-point deficit and maintained control over the final 30 minutes despite shooting just 38.9 percent from the floor. The Cougars closed the first half with a 19-4 run and held firm in the second half even after UCF clawed to within 42-39.

Fabian White Jr. added 11 points and it was his 3-pointer that blunted UCF’s rally to within three points of the Cougars.

“We have a lot of vets and older guys, so we’re not really fazed with the crowd getting loud or a hostile environment,” White Jr. said. “The (3-pointer) was just the play that was there. If I wasn’t going to hit it, somebody else was going to.”

A Houston defense that came into the game ranked second in the nation in field goal percentage allowed and second in points allowed held UCF to 30.8 percent from the floor in the second half.

Edwards, the reining AAC Player of the Week, continued his hottest stretch of the season. The 6-foot-4 senior came into the game having averaged 25.7 points in his previous three games. On Saturday, he made four of 11 3-pointers.

UCF (12-7, 4-5) lost its second straight game and for a third time in the past five games. The Knights, which beat Miami, Michigan and Memphis earlier in the season, lost to Houston for a fourth straight time and a ninth time in the pas 10 meetings.

Darin Green Jr. scored 14 points and hit four 3-pointers for the Knights. He opened the game with three straight 3-pointers and UCF proceeded to miss its next nine tries from beyond the arc. Darius Perry added 11 points.

“They’re a top-10 team in the nation and they’re that good,” UCF coach Johnny Dawkins said of Houston. “We’ve faced a lot of good teams, and I don’t think we’ve faced anyone better than them.”

Houston: The Cougars have been ranked in the AP poll a school-record 38 straight weeks, a streak that dates to Jan. 20, 2019. … The Cougars came into Saturday game as one of just seven teams to rank in the top 20 nationally in offensive and defensive efficiency.