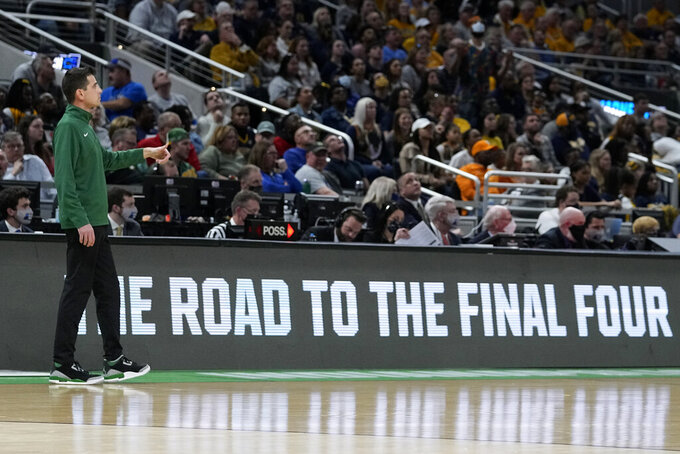 San Francisco head coach Todd Golden watches from the sideline during the first half of a college basketball game against Murray State in the first round of the NCAA tournament, Thursday, March 17, 2022, in Indianapolis. (AP Photo/Darron Cummings)

Golden signed a six-year contract worth $3 million annually to replace White, who surprised the Gators by leaving for rival Georgia last weekend.

“We’re incredibly excited about bringing in Todd, who is an innovative, relationship-oriented coach, to lead our men’s basketball program,” Florida athletic director Scott Stricklin said in a statement. “Todd brings a smart and analytics-driven approach to the game and a relational approach to leadership that puts student-athletes first.

"He has a wide range of experience, particularly for a coach his age, and brings an outstanding track record and high level of integrity to the job.”

Florida missed the NCAA Tournament for the first time since 2017 under White and was mired in mediocrity. Fans had turned on White, ripping him on social media and in the stands to the point where his wife and kids changed seats during one home game earlier this year.

White never lived up to the ultra-high expectations that came with following Billy Donovan, who led the Gators to consecutive national titles (2006-07) and four Final Four appearances before bolting for the NBA.

Coincidentally, Stricklin reached out to Donovan during a search process that lasted just a few days.

“They kept me very, very much involved, however I can help,” Donovan said Friday before his Chicago Bulls played at Phoenix. "I do think it’s a unique situation there. I think it’s a really good situation because of the people that are there. ... I think that they were trying to look for a profile.

"I’ve always said the same thing, whether it’s Providence College or whether it’s Florida. If they need me to help, I’d be more than happy to do that. But I also understand that everybody’s got jobs to do and I would just want to support them They really have been great in terms of keeping me involved in different ways I think maybe I can be useful to try to help.”

White went 142-88 in seven seasons at Florida, including 72-52 in the SEC. His up-and-down offense was the most consistent cause of criticism, a defense-first philosophy that often came up short in big games and crucial situations.

Golden will be tasked with pumping life into a slumping program and repairing relationships with fans and the community that soured during White's tenure.

“I’m energized by the opportunity to lead an elite program at Florida, and I’m ready to get started,” Golden said. “Florida has a championship-level athletic department, university and men’s basketball program, and I embrace the standard of excellence at Florida and the passion of Gator Nation. We couldn’t be more excited about what the future holds in Gainesville.”

Golden's path to Florida will remind some of Donovan, who left Wall Street to become an assistant at Kentucky and then head coach at Marshall before arriving in Gainesville at age 30.

Golden was working in advertising sales for two years after his overseas playing career ended and took a pay cut to become an assistant at Columbia in 2012. A college point guard at Saint Mary's, Golden landed at Auburn under Bruce Pearl two years later.

He turned that into a coaching gig at San Francisco, where he spent the past six years. He became the Dons' head coach in 2019 and went in 57-36 in three seasons. He helped San Fran become a competitive team in the underrated West Coast Conference.

The 10th-seeded Dons lost to No. 7 seed Murray State 92-87 in overtime in the opening round of the NCAA Tournament on Thursday night.

Golden was a standout basketball and baseball player in high school, but ended up going to Saint Mary’s as a walk-on. He developed into a three-year starter for the Dons. He didn't have nearly the college career Donovan did at Providence, but he did make the NCAA Tournament twice.

He got his big break while playing alongside Pearl's son in Australia in 2006. When Pearl took the Auburn job in 2014, he reached out to Golden. Golden spent two years learning the ropes at Auburn.

Golden is even closer with former San Francisco coach and current Washington State coach Kyle Smith; they worked together at Columbia University and in San Francisco.