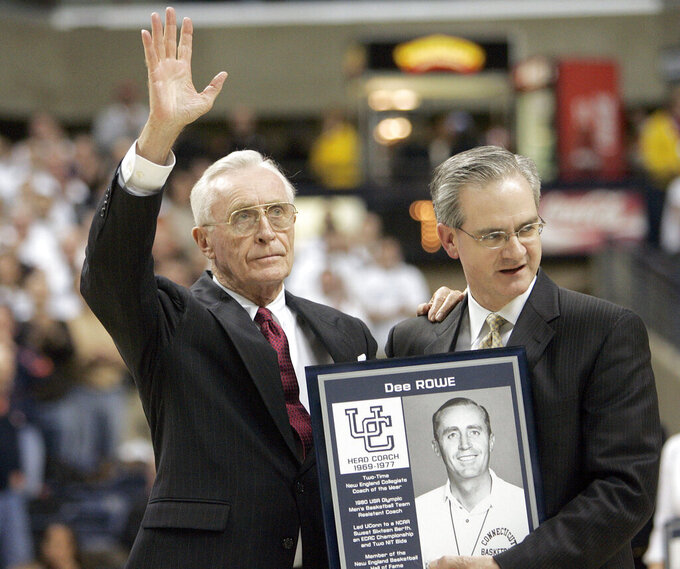 FILE - In this Feb. 5, 2007, file photo, former University of Connecticut head men's basketball coach Dee Rowe, left, waves to the crowd after he was presented with a plaque by UConn director of athletics Jeff Hathaway at a ceremony honoring former UConn basketball players and coaches at halftime of an NCAA college basketball game against Syracuse in Storrs, Conn. Rowe, who served for more than five decades as an ambassador for the school’s athletic department and as a mentor for coaches including Jim Calhoun and Geno Auriemma, died on Sunday, Jan. 10, 2021. He was 91. (AP Photo/Bob Child, File)

STORRS, Conn. (AP) — Former UConn basketball coach Donald “Dee” Rowe, who served for more than five decades as an ambassador for the school's athletic department and as a mentor for coaches including Jim Calhoun and Geno Auriemma, died on Sunday at his home in Storrs. He was 91.

After retiring as coach in 1977, Rowe launched the fundraising arm of UConn athletics and played a key role in raising money to build the school's on-campus basketball arena, Gampel Pavilion.

In 1980, Dave Gavitt chose Rowe as an assistant coach for the U. S. Olympic men’s basketball team, which never got to play because of the U.S. boycott of the games in the Soviet Union.

He also was a member of the search committees that brought Hall of Fame coaches Calhoun and Auriemma to UConn.

“I learned from Dee just by watching, how he carried himself, just the way he was” Auriemma said Sunday. “He carried himself around like an old move star from the ‘30s and ’40s. I thought to myself, ‘Man, if I can coach long enough and grow up to be like him, I’ll be the happiest guy in the world."'

In 2007, Rowe became a member of the inaugural class of UConn basketball's “Huskies of Honor" with a plaque in Gampel Pavilion. In 2017, he received the John W. Bunn Lifetime Achievement Award from the Naismith Memorial Basketball Hall of Fame.

Rowe was born Jan. 20, 1929, in Worcester, Massachusetts. He played at Middlebury College in the early 1950s and earned a master's degree in education from Boston University in 1953.

He served as director of athletics and basketball coach from 1955-1969 at Worcester Academy, building the school into a national prep school basketball power.

Rowe’s combined 21-year head coaching record at Worcester Academy and UConn was 300-132, including 120-88 at Connecticut.

“From that day in May of 1986 when Dee told me I needed to accept the challenge and take the UConn coaching job, he has always been in my corner rooting for me, my family, and my teams,” Calhoun said in a statement. “Dee Rowe is a once-in-a-lifetime mentor who had a relentless pursuit of helping people and doing good. He will not, and cannot, be duplicated or replaced.”

Rowe was preceded in death by his wife, Ginny, in 2018. He is survived by seven children and 17 grandchildren.

Funeral arrangements had not been announced Sunday afternoon.