Holloway returns to coach Seton Hall, Peacocks there as well 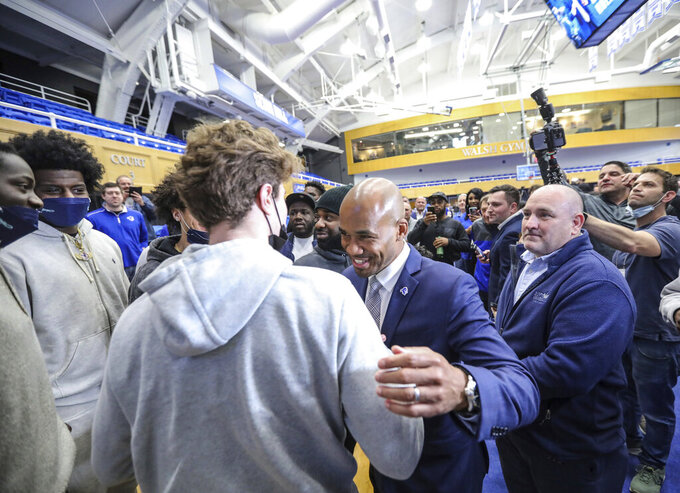 SOUTH ORANGE, N.J. (AP) — Having coach Shaheen Holloway get the head coaching job at Seton Hall wasn't a surprise at all.

The Pirates' career assists leader and star of the college coaching scene after taking Cinderella Saint Peter's to the Elite Eight, was the only person athletic director Bryan Felt considered after Kevin Willard left for the Maryland job 10 days ago.

If there was a surprise Thursday as Holloway was introduced in a tiny Walsh Gymnasium crowd of about 1,000 people, the 15 players from his uplifting Saint Peter's team were in the audience to applaud him.

This marked the second time Felt has hired Holloway. He was the Saint Peter's athletic director when Holloway was hired in 2018. Felt took the Seton Hall job in 2019 and hired Holloway again on Wednesday.

The Peacocks of the Metro Atlantic Athletic Conference became the first No. 15 seed to reach the Elite Eight. Their run to the Final Four was stopped on Sunday in a 69-49 loss to North Carolina.

"I wouldn’t be up here if it wasn’t for those 15 young men,” Holloway said shortly after being introduced. It was a remark that sparked the second of three standing ovations the Peacocks received. The first was when they walked in the gum.

Holloway said he spoke with the Peacocks for three hours on Wednesday, just before Seton Hall announced his hiring. He said it was extremely hard to leave the program he led for four seasons. He said the players made it easy for him, even teasing the 45-year-old who spent eight seasons as a Pirates assistant coach.

In replacing Willard, Holloway is taking over a Big East program that has been to five of the past six NCAA tournaments. It would have been six of seven had not the pandemic canceled the 2020 event.

Holloway, whose Peacocks beat Kentucky, Murray State and Purdue in the NCAA Tournament, said he would put Saint Peter's back on the Pirates' schedule after a four-year absence. He also went out of his way to say how important it was for him to get this job.

Holloway said he walked around Walsh Gym on Wednesday night and it brought back a ton of memories.

Holloway said he felt exhausted and drained by the past two weeks. The emotional burden reached a climax on Sunday when his grandmother, Dorothy Holloway, died. She raised him.

She had told him she wanted to be buried at Seton Hall and Holloway will try to have her wish fulfilled.

His wish is to improve the Pirates' program.

Looking at the Seton Hall players in the audience, Holloway told them to get ready to work.

Seton Hall junior forward Tyrese Samuel said Holloway probably is the most talked about coach in the country right now, and he is looking forward to working with him. He added Holloway's success is going to put pressure on the Pirates.

“Oh yeah,” Samuel said. “I think like as a player, I think you want to just continue to move on to where he left off. You know, he took a great team, Saint Peter’s, to the Elite Eight and he’s coming here trying to do the same thing. There’s no time to rest.”

Holloway said he hopes to have a say in finding his replacement at Saint Peter's, but added athletic director Rachelle Paul will do a good job.

Peacocks guard Doug Edert — with his distinctive mustache — was happy to see Holloway rewarded. Holloway will probably earn close to $2.5 million annually at Seton Hall, roughly 10 times what he got at the Jesuit school in Jersey City, New Jersey, less than 20 miles away.

“We're all happy for him and everything he did,” Edert said. “It's awesome.”

Holloway was a four-year standout at Seton Hall from 1996-00 and helped lead the team to the Sweet Sixteen in 2000. He hit the game-winning layup in overtime to defeat Oregon in the first round. He was inducted into school's athletics Hall of Fame in 2012.