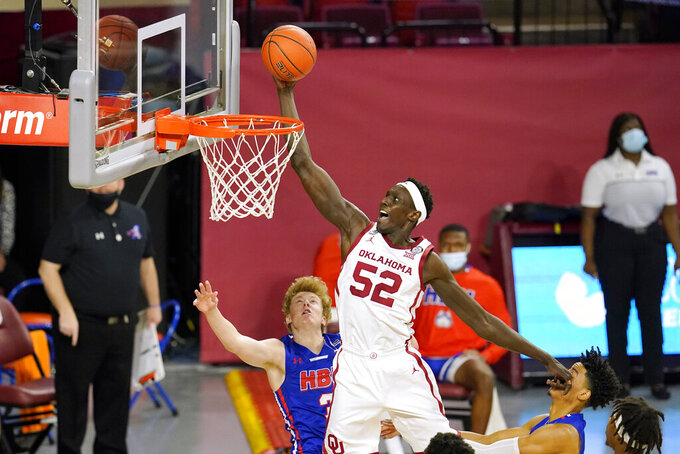 Oklahoma forward Kur Kuath (52) goes up for a dunk in front of Houston Baptist guard Brycen Long (3) and guard Pedro Castro, right, in the first half of an NCAA college basketball game Saturday, Dec. 19, 2020, in Norman, Okla. (AP Photo/Sue Ogrocki) 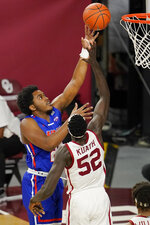 NORMAN, Okla. (AP) — Victor Iwuakor scored eight of his 12 points in a game-breaking 14-0 run that started in the middle of the second half and Oklahoma pulled away from Houston Baptist for an 84-65 win on Saturday.

Elijah Harkless made two free throws to start the run before Iwuakor had back-to-back dunks and a jumper. After Alondes Williams scored, Iwuakor added another jumper before De'Vion Harmon's layup made it 72-54 with 6:47 to play.

Houston Baptist missed eight-straight shots while the Sooners went 6 of 8. The Sooners shot 49% despite going 5 of 23 from 3-point range.

Harmon and Manek made the last two baskets of the first half to give Oklahoma a 38-35 lead.