Jackson-Davis leads Indiana past No. 16 Illinois 65-63 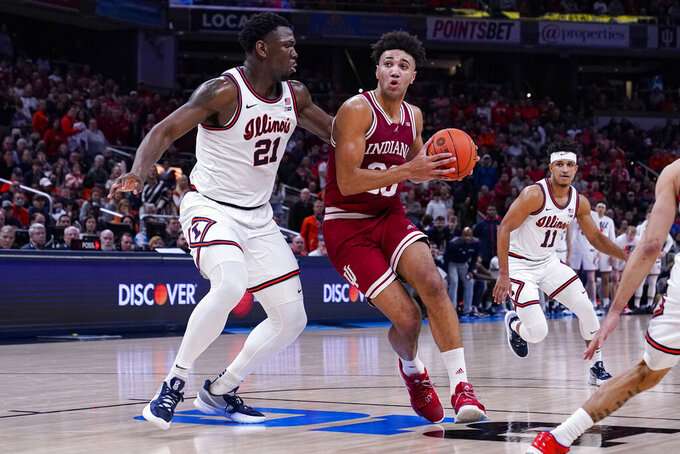 INDIANAPOLIS (AP) — Trayce Jackson-Davis had something to prove at the Big Ten Tournament.

He wanted to show the critics he could excel against the conference's top big men and that Indiana deserved an NCAA Tournament bid. So far, no complaints.

Jackson-Davis made the go-ahead free throws with 26.1 seconds left Friday, then added another foul shot with 1.7 seconds left to seal a 65-63 victory over No. 16 Illinois, sending the ninth-seeded Hoosiers to their first semifinal appearance since 2013 and likely their first NCAA Tournament since 2016.

“It’s big for us, but like I told you yesterday, we didn’t pack for two days or three days,” said Jackson-Davis, who finished with 21 points, seven rebounds and three assists. “We packed to win the Big Ten. I'm glad we got this win today to solidify our (NCAA) spot but we want to play two more games.”

Without him, Indiana (20-12) likely wouldn't have made it this far.

Jackson-Davis helped rally the Hoosiers from a 17-point, second-half deficit on Thursday against Michigan, then made a key jumper and all the right plays down the stretch against the top-seeded Fighting Illini, who hoped to win consecutive tourney crowns for the first time in school history.

Even missing the game's final free throw worked out as Jackson-Davis watched the clock run out with players scrambling for the rebound.

“I went back and watched the tape of him going against the big fella, Kofi Cockburn, and you're right, he didn’t fare well,” coach Mike Woodson said, referring to previous matchups. “Trayce got in foul trouble in our place early and just was never a factor. I challenged him again today. I said, 'You've got to go out and compete against this guy and make him respect you.'”

Cockburn finished with 23 points and 10 rebounds for Illinois (22-9) and Coleman Hawkins had a career-high 18 points as the Illini had a three-game winning streak snapped.

Illinois had two chances to take the lead in the final 15 seconds. But Trent Frazier threw the ball away with 11.5 seconds left and Andre Curbelo missed a layup with 4 seconds remaining.

“I thought Coleman would be open in the corner for a 3,” Frazier said. “But we had some confusion down there. I made a bad decision. I’m disappointed in myself. I’ve got to make a better decision.”

The Hoosiers took full advantage in a drastically different game from the teams' meeting last month, a 74-57 Illinois victory.

This time, Indiana's defense kept the Illini under control for long stretches and when Illinois went more than four minutes without scoring in the second half, Indiana responded with nine straight points to take a 47-42 lead with 12:28 to play.

Jackson-Davis' second straight basket, a 15-footer, gave Indiana a 58-57 lead with 4:12 to go. Hawkins made two free throws to put the Illini back ahead, but all they could muster after that were four free throws from Cockburn.

Indiana: Woodson's team started this weekend uncertain if it would make the 68-team NCAA tourney field. Thursday's comeback and Friday's surprise win should be enough.

Illinois: This loss will likely damage the Illini's seeding in the NCAA Tournament, but they won't know until Sunday.

Illinois needed a strong showing this weekend to continue its ascension in the AP Top 25. This loss will be a setback.

Indiana: Xavier Johnson had 13 points and six assists while Race Thompson finished with 10 points and nine rebounds. ... The Hoosiers outscored Illinois 36-24 in the paint. ... Woodson is the first Indiana coach to win 20 games in his first season since Kelvin Sampson in 2006-07.

Indiana: Faces No. 24 Iowa, the No. 5 seed, in Saturday's first semifinal.