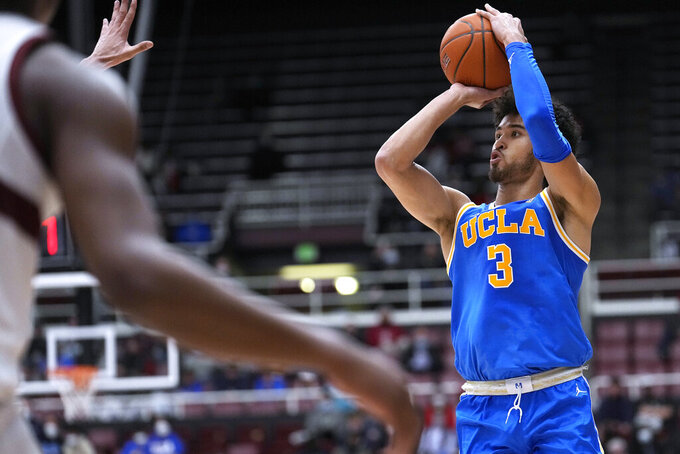 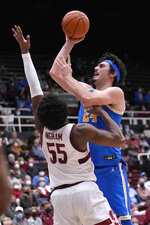 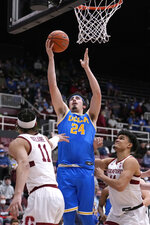 Jaquez missed two easy layups to start the second half. Juzang then drained a 3-pointer and was fouled.

That sparked an 11-0 run, putting UCLA ahead 52-37 five minutes into the second half. Stanford never got closer than seven points the rest of the way.

“That shot was because of passing,” UCLA coach Mick Cronin said. “It was an ‘iso’ If we move the ball like that, we’re going to score a lot of points. We got that run that gave us a cushion. They came back but we held on.”

“That was one of the best mid-range shooting performances I have ever seen,” Cardinal coach Jerod Haase said. “They played motivated and hungry. We tried to make a lot of adjustments. We just couldn’t get stops.”

James Keefe hit a layup with 3:58 remaining in the first half to bring Stanford within 31-29 of the Bruins, who then went on a 10-2 run the rest of the way to take a 41-31 edge into the locker room at the intermission.

HOLDING ONTO THE BALL

UCLA turned the ball over a season-low six times. The Bruins came into the game ranked fifth nationally in fewest turnovers (9.5). “Offensively, that’s as good as we’ve played in a while,” Cronin said. “We ran the floor and passed the ball better than we have.” Stanford committed 11 turnovers. The Cardinal average 15.5 per game. “The players did a nice job of handling the pressure and getting to the spots we needed them to get to,” Haase said. “We played with more of an edge.”

UCLA: The Bruins entered play Tuesday with their first losing streak of the season. The two losses in Arizona not only cost UCLA a spot in the top 10, but a chance to move into first in the Pac-12. … The Bruins played in Maples Pavilion for the first time since Feb. 16, 2019. The Cardinal hosted UCLA in Santa Cruz last season.

Stanford: The Cardinal had their worst offensive showing of the season in their first meeting with UCLA, scoring 43 points on 13-of-48 shooting (27.1%), which included a 3-of-20 effort (15%) from long range. Stanford played its fourth game in eight days and still have two more games in Oregon this week.

UCLA: at USC on Saturday.

Stanford: at Oregon on Thursday.