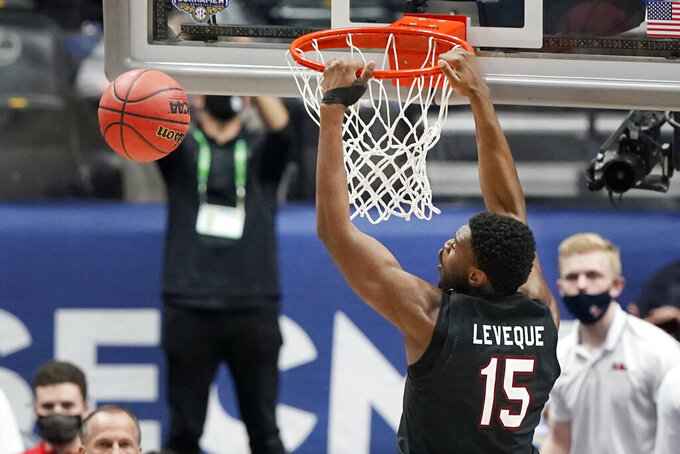 South Carolina's Wildens Leveque (15) scores against Mississippi in the first half of an NCAA college basketball game in the Southeastern Conference Tournament Thursday, March 11, 2021, in Nashville, Tenn. (AP Photo/Mark Humphrey)

The sixth-seeded Rebels (16-10) play No. 3 seed LSU in the quarterfinals Friday. The Tigers beat Ole Miss 75-61 on Jan. 9. and had a game that was originally scheduled for Feb 28 at LSU canceled by issues concerning the coronavirus pandemic.

Jalyn McCreary scored 15 points, Wildens Leveque added 14 and AJ Lawson scored 12 for No. 11 seed South Carolina (6-15). Keyshawn Bryant and Jermaine Couisnard did not play for undisclosed reasons. The duo combined to average more than 24 points this season, including 14.4 by Bryant.

Luis Rodriguez hit a 3-pointer to spark a 14-2 run to close the first half and give the Rebels a 15 point lead. After Rodriguez made 1-of-2 free throws, Joiner sandwiched a layup and a jumper around two foul shots to make it 37-24. T.J. Moss made two free throws — South Carolina's first points in nearly four minutes — before Joiner went 4 of 4 from the foul line in the final 47 seconds to make it 41-26 at halftime.

Devontae Shuler had 15 points and five assists and KJ Buffen added eight points and nine rebounds for the Rebels. Shuler is a native of Irmo, South Carolina, about 10 miles from the Gamecocks' campus.

The Gamecocks scored eight of the first 10 second-half points to trim their deficit to nine points but White answered with a layup and Ole Miss led by double figures the rest of the way.