Mamukelashvili opts out of NBA draft, returns to Seton Hall 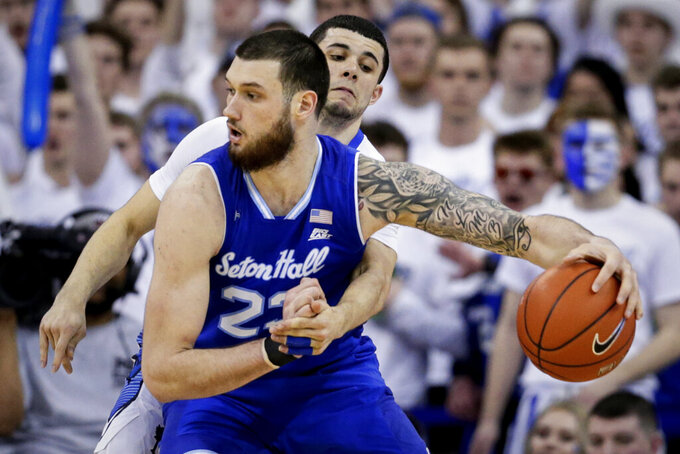 FILE - In this March 7, 2020, file photo, Creighton's Marcus Zegarowski, rear, reaches for the ball against Seton Hall's Sandro Mamukelashvili (23), during the second half of an NCAA college basketball game in Omaha, Neb. Mamukelashvili has opted out of the NBA draft and is returning to Seton Hall for his senior year. (AP Photo/Nati Harnik, File)

SOUTH ORANGE, N.J. (AP) — Forward Sandro Mamukelashvili has opted out of the NBA draft and is returning to Seton Hall for his senior year.

Mamukelashvili announced his decision over the weekend after thinking about the draft for months.

Seton Hall (20-9) was on the verge of a fifth straight NCAA Tournament berth when the season was ended because of the coronavirus pandemic.

The return of Mamukelashvili and the addition of graduate transfer Bryce Aiken from Harvard are expected to allow the Pirates to compete for an NCAA berth next season. Seton Hall lost Big East Conference player of the year Myles Powell, point guard Quincy McKnight and center Romaro Gill to graduation.