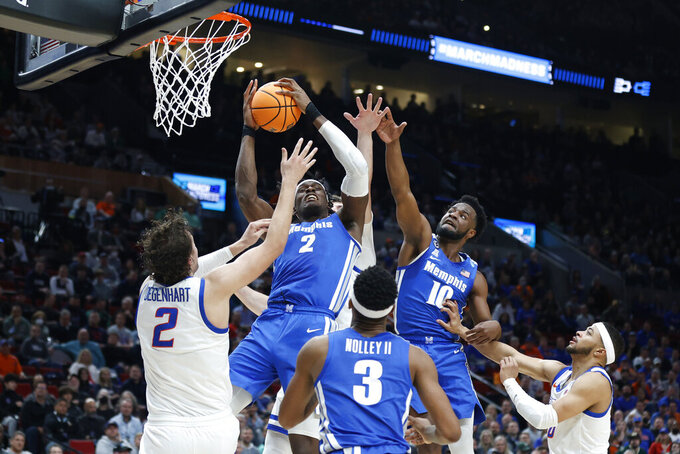 PORTLAND, Ore. (AP) — Lessons from a tough start to the season helped Memphis weather a second-half challenge by Boise State on Thursday.

DeAndre Williams had 14 points, Jalen Duren made a crucial basket down the stretch and the ninth-seeded Tigers survived their first-round game against the Broncos with a 64-53 victory in the NCAA Tournament.

The Tigers (22-10), whose poor start to the season had coach Penny Hardaway dropping expletives in a press conference, are into the second round in the West Region and will play top-seeded Gonzaga on Saturday. The Bulldogs downed No. 16 seed Georgia State, 93-72.

“I just felt like (Hardaway) did a great job of preparing us for that moment. Just throughout my past and my history, I’ve always been in games where I could be up 20 or down 20, and the game is never over,” Duren said. “Coach Penny put us in the right spots, that always help us get through every time.”

Duren finished with 10 points and 11 rebounds for the Tigers, who were 9-8 after 17 games but went on a late-season charge to reach the tournament for the first time since 2014. The Tigers have now won 13 of their past 15 games.

Abu Kigab had 20 points to lead the eighth-seeded Broncos (27-8), the Mountain West regular-season and tournament champs, who were making their first appearance in the tournament since 2015.

Boise State trailed by 19 at the half but, taking advantage of a cold snap by the Tigers, narrowed the gap to 42-35 with 9:45 left. The Tigers had scored just four second-half points before Williams' dunk with 9:18 left got them going again.

Kigab hit a 3-pointer and a short jumper to get Boise State within 49-43 with 5:55 remaining, but Williams answered again with a 3-pointer for the Tigers. And when the Broncos closed to 56-51 with 1:26 left on Naje Smith's layup, and the teams traded foul shots, Duren's layup pushed the margin to 60-53 to give Memphis some breathing room.

Alex Lomax, hobbled in the first half by an ankle injury, added some clinching free throws for the Tigers.

It was a disappointing finish to a dream season for longtime coach Leon Rice, whose Boise State teams had been dumped from the NCAA Tournament in First Four games their past two trips. The Broncos beat San Diego State to win the Mountain West tourney title and their 27 wins set the school record for a single season.

“That’s a team that’s putting it together," Rice said of the Tigers. “I know they had a rough stretch and I know they started out in top 10 in the nation, and you see why. But they worked through some stuff throughout the year and they’ve turned it on right now and they’ve got it going."

Memphis had the nation's top recruiting classes, led by Duren and fellow five-star talent Emoni Bates, but Hardaway struggled to find a solid lineup until January — Bates had not played since Jan. 27 because of a back injury.

The Tigers have hit their stride down the stretch, though, reaching the title game of the American Athletic Conference tourney before losing to Houston. And they kept that momentum going into Thursday's first-round game, going on an 8-0 run early to take a 27-17 lead when Bates hit a 3-pointer with 4:26 left in the half.

Lomax hit a 3 a few minutes later that gave Memphis a 38-19 lead at the break, but he came down hard and appeared to injure his left ankle. He was limping as he headed for the Tigers' bench but returned to start the second half.

Bates, who reclassified as a freshman, traveled to Portland with the team but it wasn't certain he would play until the moment he stepped on the court. He warmed up before tipoff and was in uniform for the game, finally checking in with 5:57 left in the first half. His 3-pointer was his only points of the game.

Bates finished with three points in about 3 1/2 minutes. Hardaway said he decided not to play him more down the stretch as the game got tense.

“He did fantastic today, stayed positive, watched the game, learned a lot today,” Hardaway said. “Getting on the floor, getting his juices flowing again, he’s a tough competitor.”

Memphis, which beat Boise State in last year's NIT, had a big advantage on the boards (39-30) to overcome 15 turnovers and pull away down the stretch. But it will take a better performance on the offense end if the Tigers want to beat their likely second-round opponent Gonzaga, the national runner-up a year ago.

Boise State, which ranked 17th in the nation for defensive efficiency, had not trailed by more than seven points at halftime before Thursday. The Broncos nearly overcame the deficit but it proved to be simply too much.

Memphis faces Gonzaga on Saturday for a spot in the Sweet 16.