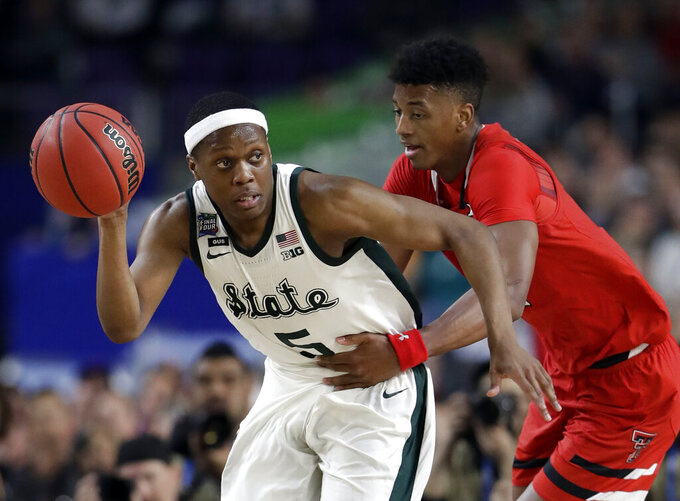 EAST LANSING, Mich. (AP) — All-America guard Cassius Winston wants to accomplish more at Michigan State. He is coming back for his senior season.

"It will always be my goal to play in the NBA, but that's a dream that can wait a year," Winston said Friday.

Teammate Nick Ward said he is entering the draft and plans to sign with an agent and end his college career.

The decisions seem to solidify the Spartans as a contender for a national championship next season. While they will miss Ward's low-post scoring and rebounding, forward Xavier Tillman proved he could produce in his place last month. And, much of Tom Izzo's team will return along with a pair of talented freshmen to join a deep and talented team.

Winston, the Big Ten player of the year, averaged nearly 19 points per game as a junior and broke a Big Ten single-season record with 291 assists. He led the Spartans to the Final Four after helping them win the Big Ten regular season and tournament titles.

"It was surreal to be compared to some of the all-time great Spartans during the tournament because in my mind I still have something left to prove," Winston said. "Those goals will motivate me throughout the offseason I look forward to improving as a player, and continuing to get stronger."

Izzo said his ultimate goal is to watch players live their dreams.

"So if Cassius dreams of becoming one of the best players in Spartan basketball history and leaving a legacy, I look forward to doing everything I can to help him make that a reality," Izzo said.

Ward averaged nearly 13 points and six-plus rebounds per game in a season stunted by a broken left hand. He entered his name in the NBA draft last year after his sophomore season and chose to return to college.

"Based on the feedback I got last year and discussions with coach Izzo, I'm ready for this challenge and look forward to this next chapter," Ward said.

"He has worked very hard over the last three years to put himself in this position and I look forward to helping him reach his dreams," Izzo said.