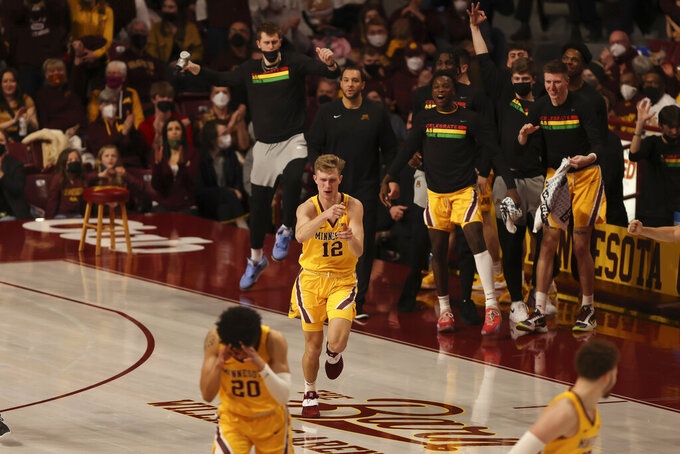 Minnesota guard Luke Loewe (12) reacts after making a 3-point basket during the second half of an NCAA college basketball game against Northwestern, Saturday, Feb. 19, 2022, in Minneapolis. (AP Photo/Stacy Bengs) 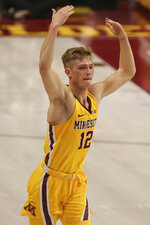 MINNEAPOLIS (AP) — Luke Loewe has found his stride in his first and only season with Minnesota, after the initiation into Big Ten play brought his share of struggles.

The 3-pointer has become Loewe's friend again, as evidenced by his 6-for-10 performance from long range for the Gophers in their most recent game.

Loewe will soon be back in his other element, on the hunt for 3-pounders — as in bass.

“He's having withdrawals right now, because he hasn't fished in I don't know how many months,” teammate Eric Curry said.

This is quite the week for Loewe, the 6-foot-4 guard who joined the Gophers for 2021-22 as a graduate transfer from William & Mary.

Minnesota hosts 13th-ranked Wisconsin on Wednesday night, a rematch against the rival Badgers and another chance for Loewe to beat the home-state team that wasn't interested in him out of Fond du Lac High School.

“I’m looking forward to that one,” he said, “getting another crack at them.”

There's also an outing to Lake Minnetonka in the works on Thursday for Loewe and some of his amateur-angler teammates.

For Loewe, fishing is more than just a time-killing hobby. He has actual aspirations of fishing professionally, with his own YouTube channel — Bass and Buckets — featuring plenty of shop talk and a dash of good humor.

His father, Jason Loewe, taught him the tricks of the trade around age 6, and his love for the rod and the reel has matched that for the ball and the basket ever since. Loewe won a junior national bass fishing championship when he was a teenager

Last summer and fall, before the season got going and the weather turned wintry, Loewe took advantage of the ample lakes around the Twin Cities area and the local presence of his uncle and cousin and was able to enjoy plenty of fishing.

As he deadpanned during a tour of team facilities for one of his YouTube videos, Loewe had to use his index finger for the print to secure biometric access to the building because he had “bass thumb” — the skin was too raw from handling all those wet fish.

As one of 10 incoming transfers on the Gophers this season, the most among all power conference programs, Loewe had to make a quick transition to new teammates and a higher caliber of competition. The chemistry came easily. The results on the court were more mixed.

After a 10-1 start, the Gophers had a brutal start to their January schedule with Illinois, Indiana, Michigan State and Iowa. They lost all four, while Loewe shot just 5 for 25 from the floor.

Over the last 10 games, though, he's averaged 12.6 point and shot 44.7% from 3-point range. In a victory over Northwestern on Saturday, Loewe scored a season-high 24 points.

“It was the most fun I’ve had in a basketball game in awhile,” Loewe said. “Things were just going right for us. Everyone was making the right play."

Earlier this month, at the apex of his shooting slump, Gophers coach Ben Johnson urged Loewe to relax about his shots and ignore the internal pressure to play the impossible perfect game.

“I just told him, ‘You’ve got to go back to when you’re like a kid at the park,'” Johnson said.

The message was heeded, and his confidence has come back. Loewe's family never left, and with relatives in both Minnesota and Wisconsin he'll again have a boisterous support group for the game on Wednesday. “They like to take pictures,” Loewe said, so — win or lose — he could well be the last player to leave the court after the requisite poses.

“That’s usually why I’m the last one to hand my jersey to the managers,” Loewe said.

For all the transition the Gophers underwent entering the season after Johnson took the job, they’ll have to go through more of it with the impending departure of Loewe and seven other seniors. Loewe and fellow guards Payton Willis and E.J. Stephens will all be moving on in another month.

“For us, we really hit the lottery with those three guys in the backcourt, and that’s going to be a huge, huge hole for us to try to replace next year,” Johnson said.