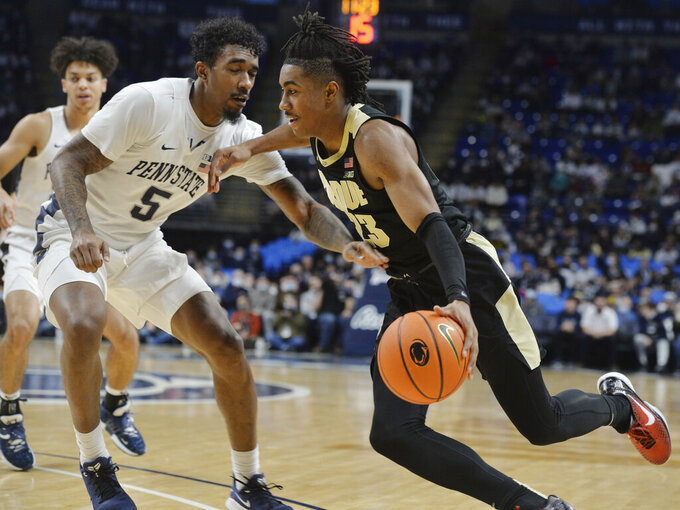 Purdue’s Jaden Ivey has not had any trouble finding ways to stay motivated even after playing his way into NBA lottery consideration.

No matter how high he rises on draft boards, Ivey continues to play as though he always has something to prove. After a victory over Nebraska last week, Ivey said he had fired himself up over a perceived lack of respect that followed No. 4 Purdue’s recent losses.

“Each and every game, I’ve got to see what to do to keep me fired up and I just try to bring that fuel to the team,” Ivey said.

Ivey has made it a point to try to diversify his game as much as possible.

The 6-foot-4 sophomore played his 40th career college game Monday when Purdue edged Illinois in double overtime. Ivey and Presbyterian’s Rayshon Harrison are the only active Division I players with at least 500 points, 150 rebounds and 90 assists while playing 40 or fewer games.

“I felt like I proved I can move the ball, find my teammates,” Ivey said. “I’ve been trying to make sure I’m not one-dimensional whether that’s scoring the ball, passing the ball, rebounding the ball and playing defense.”

Ivey grew up around the game as the son of Notre Dame women’s coach Niele Ivey, a point guard on the 2001 Fighting Irish team that beat Purdue to win the national title.

Rated as the No. 89 prospect in his class according to composite rankings of recruiting sites compiled by 247Sports, Ivey wasted no time outperforming that projection while showcasing his athleticism.

He averaged 11.1 points as a freshman and has taken his game to another level this season while capitalizing on his versatility to develop into one of the Big Ten’s top players.

His stock will continue rising as long as he maintains that competitive edge as he follows the advice of his coach.

“Just keep it going,” Purdue coach Matt Painter said. “But understand it’s process-oriented. Do your job, play hard, have fun with it and learn from it. Be honest with yourself. When you do those things, good things are going to happen.”

STRENGTHS: Ivey’s athleticism is his greatest quality. It enables him to score in different ways. He also has become better at setting up scoring chances for his teammates.

DRAFT PROJECTION: He's a likely top-10 pick and could be one of the first five guys chosen.

G JOHNNY DAVIS, WISCONSIN: Davis continues to cement his status as a lottery pick and front-runner for national player of the year awards. He scored 27 points Tuesday as the eighth-ranked Badgers won 82-76 at Northwestern for their seventh straight victory.

C ZACH EDEY, PURDUE: Ivey isn’t the only Purdue sophomore making a name for himself. Edey, who is 7-foot-4, has scored at least 20 points in four of his last five games to boost his stock.