No. 1 Gonzaga faces stiff test against No. 16 Virginia 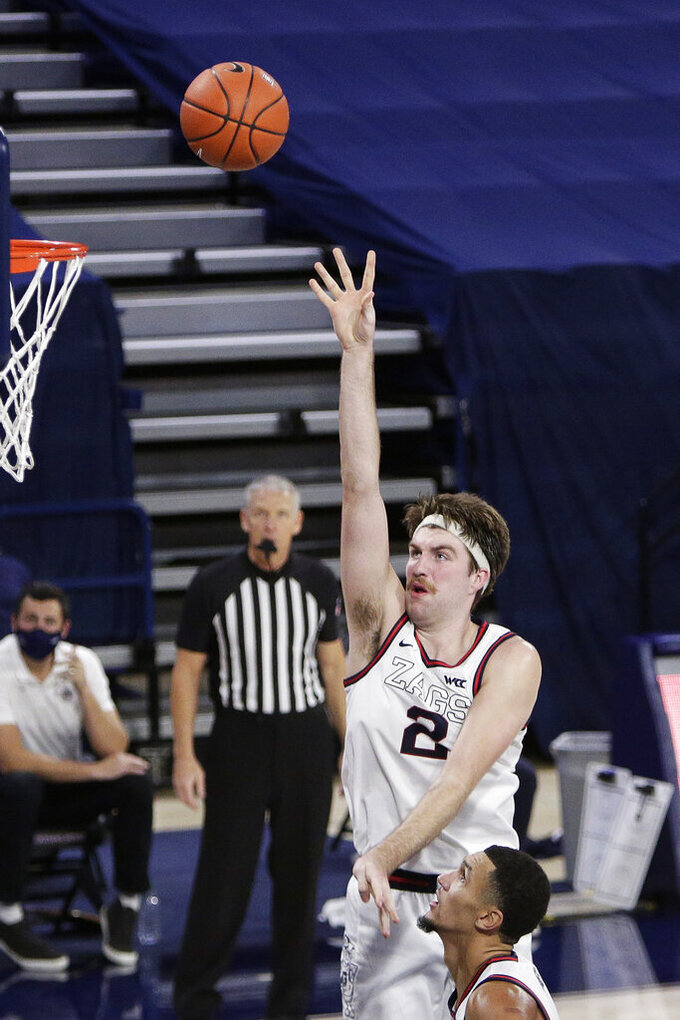 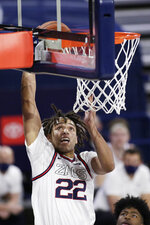 Gonzaga has consistently scheduled difficult games under coach Mark Few to test itself early in the season.

This year has been no different.

The top-ranked Zags have played three Top-25 teams already and face another one Saturday against No. 16 Virginia, a week after beating then-No. 3 Iowa. Gonzaga already has wins over No. 3 Kansas, No. 7 West Virginia and Auburn.

The Bulldogs (5-0) also had a game against second-ranked Baylor get canceled due to COVID-19 issues, and rescheduled a road game against Arizona until next season.

Gonzaga blew out Northwestern State 95-57 Monday night and plays the Demons again Tuesday night in tune-ups for the Virginia game, which was added last week after having five games scratched due to the coronavirus.

Gonzaga has played one close game, a five-point win over West Virginia, and is winning by nearly 18 points per game. The Zags are No. 2 in the KenPom ratings and have five players averaging double figures, led by Drew Timme's 21.3 points per game.

TOP-10 TUESDAY: The Big 12 has what could be the best game Tuesday night, with No. 3 Kansas facing No. 7 West Virginia.

The Jayhawks (7-1) moved up two spots in this week's poll after beating No. 11 Texas Tech last week. Kansas has not lost since its opening game against Gonzaga.

West Virginia (7-1) also has its only loss this season to the Zags and is coming off a five-point win over Iowa State.

These teams like to get after each other, so it should be a good one.

CHRISTMAS TIME: Basketball on Christmas has typically been limited to the NBA, but this year there are three games involving ranked teams.

The marquee game is No. 9 Wisconsin at No. 12 Michigan State.

The Badgers (6-1) blew out Louisville last week and face Nebraska at home on Tuesday. The Spartans (6-1) are coming off a disappointing loss to Northwestern.

No. 4 Iowa (6-1) faces Minnesota on Christmas after playing Purdue on Tuesday. The Hawkeyes dropped a spot in this week's AP Top 25 after losing by 11 to Gonzaga.

No. 19 Michigan, which moved up six spots in this week's poll, faces Nebraska.

RANKED VS. RANKED: Two games on Wednesday feature ranked teams facing each other.

No. 11 Rutgers is on the cusp of its first top-10 ranking in 35 years after beating then-No. 13 Illinois last week. The Scarlet Knights (6-0) will face No. 23 Ohio State, which has wins over Notre Dame and UCLA so far.

Rutgers' win over Illinois was its first in a game when both teams were ranked since 1975-76.

No. 22 Xavier (8-0) has yet to lose this season and moved into the AP poll this week for the first time this season. The Musketeers will face No. 13 Creighton (6-2), which dropped four spots in this week's poll after losing to Marquette. The Blue Jays followed with wins against St. John's and UConn last week.

Watching Creighton guard Marcus Zegarowksi face off against Xavier's backcourt of Paul Scruggs and Nate Johnson should be quite a show.