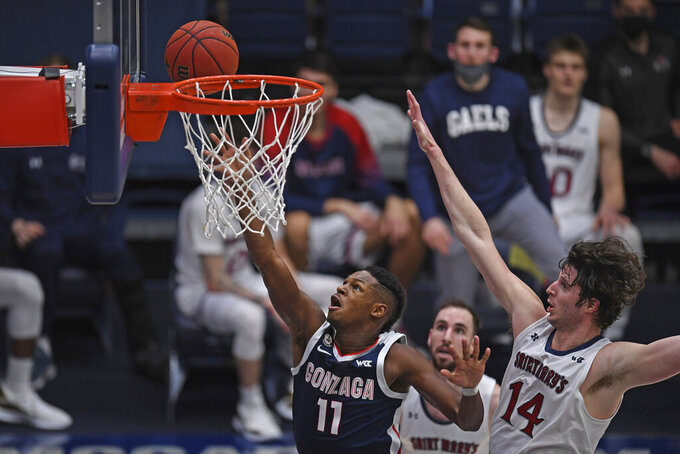 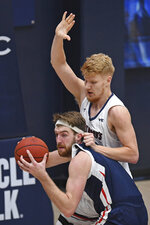 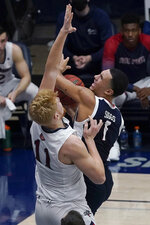 MORAGA, Calif. (AP) — McKeon Pavilion is typically one of Gonzaga's toughest conference road stops, so it certainly felt strange devoid of all those raucous fans.

Corey Kispert had 17 points and five rebounds and No. 1 Gonzaga overcame a slow start with a surge to end the first half, pulling away late to beat rival Saint Mary's 73-59 on Saturday night for its 18th straight victory spanning the past two seasons.

A 4.5-magnitude earthquake in the South Bay shook the gym early in the second half. Play continued with no disruption with the cardboard cutouts still smiling in the fold-back chairs behind the benches.

“It’s definitely hard. This place is usually rocking,” Gonzaga forward Drew Timme said. “I think we have to do a better job of creating our own energy.”

Gonzaga's smothering defense pushed the Gaels right up against the 30-second clock early, but Saint Mary's made 4 of its first 5 3-point tries.

“Not a pretty game for us, and Saint Mary’s deserves a lot of credit for that,” Gonzaga coach Mark Few said. “I thought they did a good job of taking the fight to us, especially that first few minutes, then we kind of settled in."

The Zags are tied with Winthrop for the longest winning streak in the country. They ran the nation's best unbeaten streak at home to 46 against Pepperdine on Thursday night.

Saint Mary's scoring leader Tommy Kuhse had 10 points on 4-of-12 shooting with seven assists. The short-handed Gaels brought energy on both ends early but couldn't sustain it for 40 minutes.

“You have to generate some points against those guys because they’re going to score,” Saint Mary's coach Randy Bennett said. “We’ve been pretty good defensively this year. We only played seven guys, you can run out of juices a little bit. That was our best chance to win so we went with it. ... You have to score more. I don’t think you can hope to keep them under 60."

Johnson drew a big charge against Ayayi at the 13:31 mark of the first half as Saint Mary's built a 12-7 lead and the Zags started 2 of 7 from the floor. Kuhse took a charge late in the first half on an offensive foul by Jalen Suggs, who scored 14 points.

Gonzaga: The Zags made three quick steals and wound up with six, two from Anton Watson. ... Senior forward Kispert moved one win away from eighth place in program history for most career victories — he's 109-10. ... Aaron Cook scored eight points and is six from 900 for his career. ... The Zags have won 19 of the last 23 in the series and are be 48-11 vs. the Gaels under 22nd-year coach Few. ... They have won 23 January games in a row.

Saint Mary's: Bennett is looking forward to the return of G/F Alex Ducas perhaps by late this month from a foot injury that has sidelined him the past seven games. ... F Kyle Bowen fouled out with 4:01 left. ... After the Gaels' defense held BYU to 1 for 10 on 3-pointers Thursday — 0 of 6 in the second half — the Zags were held to 4 of 11 from deep. ... Saint Mary's committed just 10 turnovers for the second straight game.