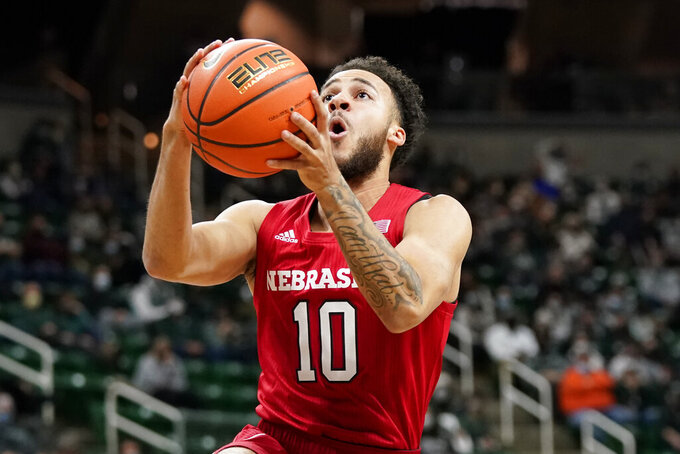 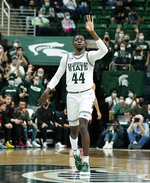 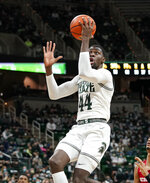 The Spartans (13-2, 4-0 Big Ten) led by just four points at halftime because they turned the ball over 12 times. They built a bigger lead by taking better care of the basketball, finishing with 19 turnovers.

Many of Michigan State’s miscues with the ball were unforced, including some that led to 11 turnovers in the first 10 minutes of the game.

“No, nothing has been more puzzling than some of these turnovers,” said Hall of Fame coach Tom Izzo, who is in his 27th season. “Some of those were bizarre.”

Michigan State made three 3-pointers early in the second half to go ahead 47-39 and that proved to be the pivotal.

“That’s all it takes for Michigan state in this building, they’re going to capitalize on mistakes," coach Fred Hoiberg said.

The Cornhuskers (6-9, 0-4) started strong, leading 17-12 and by a point late in the first half and didn't allow the Spartans to pull away until late in the second half.

“I loved our juice early," Hoiberg said. “We had great fight all night long."

McGowens missed 9 of 15 shots, usually while Christie was guarding him.

Malik Hall scored 12 and Tyson Walker had 10 points and for the Spartans, whose losses this season were against No. 1 Baylor and No. 6 Kansas.

Michigan State hosted its first game with a requirement that all spectators provide proof of COVID-19 vaccination or a negative COVID-19 test within 72 hours of the tipoff.

The new policy may have been a factor that kept some people away because there were a lot of empty seats and some upper-section rows without fans at the Breslin Center.

Nebraska: The program has lost 20 straight games to ranked teams, dating to the Huskers' win over No. 21 Maryland in the 2019 Big Ten tournament.

Michigan State: If Izzo's team can figure out how to cut down on its turnovers, it has a shot to win the Big Ten and to perhaps make a run in the NCAA Tournament.

“We're not going to win if we keep turning the ball over," Tyson Walker said.

Michigan State senior Marcus Bingham had just four points, four rebounds and no blocks in 19 minutes. He entered the game ranked second on the team with 11 points a game, and first with three blocks and eight rebounds per game.

“If a guy doesn’t play with any energy, he’s probably not going to play," Izzo said. “It’s a shame because Marcus has been real good."

Nebraska lost a five-point lead late in its previous game against then-No. 13 Ohio State before losing in overtime. The Huskers also lost a four-overtime game this season against North Carolina State.

“I give Fred a lot of credit," Izzo said. “They probably had three or four wins they should’ve had."

The Spartans have won nine straight against Nebraska over the last six years.

Nebraska: Stays on the road to play at Rutgers (8-5, 2-1) on Saturday afternoon.

“Which one of you won’t turn the ball over?" Izzo asked reporters. “You’ll start."