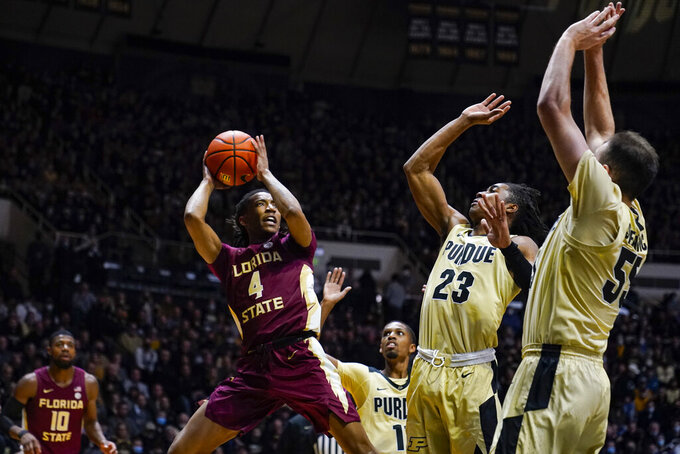 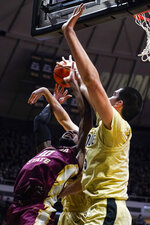 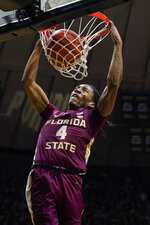 WEST LAFAYETTE, Ind. (AP) — One day after matching the highest ranking in school history, No. 2 Purdue wanted to show it's second to none.

“I give coach (Matt) Painter a lot of credit for assembling the most complete team I've played against in a long time,” Seminoles coach Leonard Hamilton said. “Sometimes, you've got to call it like it is — this team has Final Four written all over it.”

Perhaps this will be the squad that ends Purdue's 41-year Final Four drought. It's certainly been a different kind of start.

Purdue improved to 7-0 for the first time since 2015-16 and the seventh time since 1940. The Boilermakers have shot 50% or better in all seven games this season, their longest streak since an eight-game span in February and March 1987. And with a little help, they just might ascend to the first No. 1 ranking in school history.

“I thought our ability to make some shots and then blend in some post-ups was big," Painter said. “Any time we can have that complement of good decision-making, making 3s and using our size, we’re going to put people in some binds."

Losing starting guard RayQuan Evans and starting center Tanor Ngom didn't help Florida State. Ngom sat out with a right knee injury and Evans was in Montana to attend the funeral for his brother, Tye Oldelk Lafranier, who died Nov. 20 from a rare and aggressive form of leukemia.

But Hamilton didn't think it would have made any difference Tuesday.

Florida State (5-2) was led by Caleb Mills with 22 points and John Butler with 10 as its four-game winning streak ended.

It didn't take Purdue long to take control on the way to its seventh straight home win in the annual clash between the Big Ten and Atlantic Coast Conference.

The Boilermakers started pulling away with an early 6-0 run, later scored eight straight to make it 27-14 midway through the first half and headed to the locker room with a 48-32 advantage.

Florida State slashed the deficit to 59-51 with 11:43 left, but the Boilermakers answered with 12 straight points to make it 71-51 and continued pulling away over the final 8 1/2 minutes.

“I think it just comes from all the hard work we put in in practice and buying in to what the coaches tell us," Ivey said. “Then when the game comes, it's executing perfectly. I think it we do that we can be a really good team. We already are.”

Florida State: Hamilton's young team couldn't match the Boilermakers' size, talent or maturity. But he's optimistic the Seminoles will improve. For now, the goal is to get sharper before they open Atlantic Coast Conference play on Saturday.

Purdue: The Boilermakers haven't played the toughest schedule in America. But they've topped the 90-point mark six times, have five wins by 24 or more points and victories over North Carolina, Villanova and now Florida State — with more chances to improve an already strong resume.

Hours before Purdue took the court, the Indiana Basketball Hall of Fame announced Boilermakers coach Matt Painter would be part of next year's induction class. The ceremony is scheduled for March 23.

Florida State: The Seminoles lost for the first time in the five-game series and in their first trip to Mackey Arena. ... Florida State was outrebounded 36-25, outscored 38-26 in the paint and only attempted six free throws. ... The Seminoles haven't beaten top-five team since the 2019 ACC Tournament semifinals against then-No. 2 Virginia, which went on to win that year's national title.

Purdue: Sasha Stefanovic made three 3s and finished with 11 points and eight assists. ... Zach Edey and Isaiah Thompson each scored 12 points. ... Purdue is 9-1 all-time when ranked No. 2 and a Big Ten-best 12-9 in the Challenge.