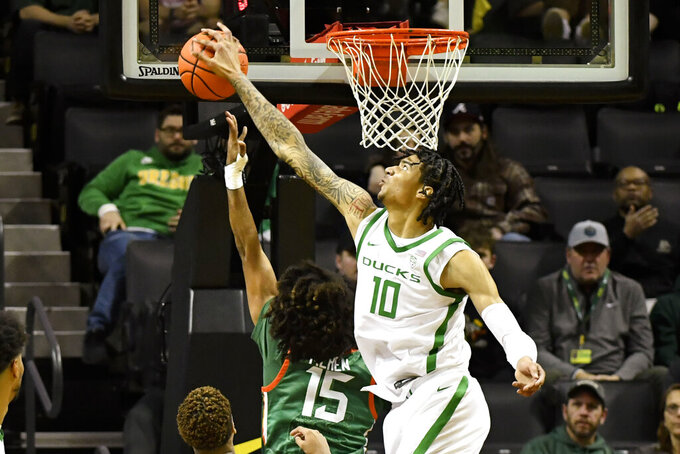 Keeshawn Barthelemy added 13 points for the Ducks, ranked to begin the season for the ninth straight year.

Dante, guard Will Richardson and forward Quincy Guerrier are all returning starters for the Ducks, who finished last season 20-15 overall.

“I feel great. Since I've been at Oregon, I haven't had a summer to work out with the team and practice with the team,” said Dante, hampered by injuries in 2020-21 and at the start of last season. “I was glad to have that, and glad to have a team that trusts me and picks me up every single day when I'm down. It feels great.”

It was Dante's fifth career double-double. He also made four steals.

Richardson led Oregon with 14.1 points and 3.6 assists last season. He flirted with going pro but withdrew his name from the NBA draft in early June to instead use an extra year of eligibility with the Ducks this season. He had 11 points in the opener.

Oregon began to pull away midway through the first half. Dante hit a pair of layups and junior college transfer Tyrone Williams added another to put the Ducks up 27-13.

Dante's dunk put Oregon up 43-31 with just over 16 minutes left. Barthelemy's 3-pointer extended the lead to 54-35, and Oregon rolled to the win.

“We didn't have as many communication mistakes as we've had in our two scrimmages before tonight,” Oregon coach Dana Altman said. “So I was pleased with the rebounds. Pleased with the defense, especially in the second half, but Cal-Irvine on Friday will be really good, Montana State is an NCAA Tournament team. Obviously, Houston in 10-11 days will be really tough. We've got a lot of work to do to be ready for those folks.”

The game was part of the Pac-12′s basketball partnership with the Southwestern Athletic Conference that debuts this season. The Legacy Series between the two conferences seeks to foster competition and education around issues of anti-racism and social justice. Oregon’s game against Florida A&M, among the HBCUs in the SWAC, was the first of 12 men’s and women’s Legacy Series games for Pac-12 teams this season.