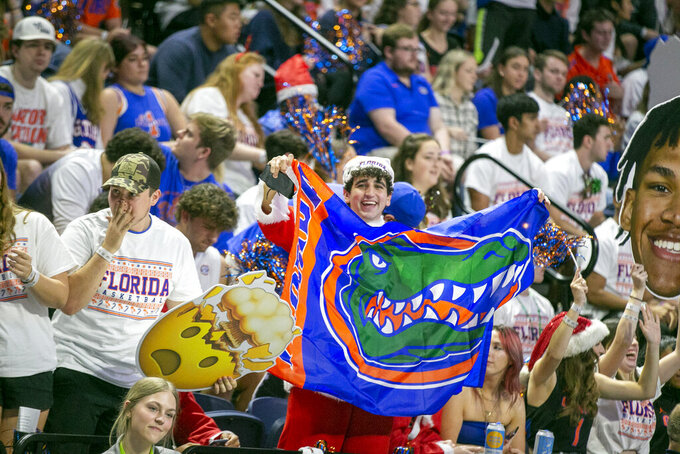 GAINESVILLE, Fla. (AP) — UConn's first true road test looked a lot like every other game the Huskies have played this season: not much of a contest.

The Huskies took control early, built a 15-point lead midway through the second half and never let the Gators (6-4) back in it. It was another strong performance for a team that’s been mostly unchallenged through the first month of the season.

UConn has won every game double digits, including nine by 15 or more points.

“They came on the road and laid it down on us,” Florida starter Colin Castleton said.

Sanogo and Clingan dominated their low-post matchup with Castleton, combining to make 16 of 22 shots to go along with 15 rebounds and four blocks. They held Castleton to 4-of-14 shooting.

Some thought this one would be different since it was UConn’s first true road game — the Huskies were four-point favorites according to FanDuel Sportsbook — but Florida had no answers for coach Dan Hurley’s balanced and bruising attack.

When Sanogo picked up his second foul in nine minutes of work in the first half, Hurley turned to 7-foot-2 freshman Clingan and the Huskies didn’t miss a beat.

“Depth is the key to who we are,” Hurley said. “Obviously the identity is defense and to dominate the backboard. ... But we can play a slow-down game, an up-tempo game. We can play big. We can play small. And the depth is what makes this whole thing work.”

Jordan Hawkins chipped in 15 points for the Huskies, who also got 11 from Joey Calcaterra.

Florida wore replica uniforms from 1994, the season in which the Gators upset UConn in overtime in the Sweet 16 and ended up making the Final Four for the first time in school history. The throwbacks did little to get coach Golden a signature victory in his first season in Gainesville.

“They’ve done this to other teams as well," Golden said.

Castleton finished with 12 points, eight rebounds, two assists, two blocks and two steals. The Gators had several chances to make it a single-digit game in the second half but missed open shots and then got beat in transition. Alex Fudge and Riley Kugel led the way for Florida with 13 points apiece.

Florida's point guard trio of Trey Bonham, Kyle Lofton and Myreon Jones finished 0-of-15 shooting, with two assists and two turnovers. But the biggest difference was in the paint, where Sanogo and Clingan gave the Huskies a 40-22 advantage.

UConn will have a chance to rise in The Associated Press college basketball poll. The last time the Huskies were No. 4 was in November 2011.

UConn: It's time to start thinking about UConn as a national championship contender. Winning road games is never easy, and Florida has a solid crowd for a 9 p.m. tip in the O'Dome. The crowd and the unfamiliar gym had little effect on Hurley's team.

Florida: The Gators fell to 5-18 all time against nonconference teams ranking in the top five, including 2-4 at home. Golden clearly has work to do to get the Gators on par with the Southeastern Conference's elite teams.

UConn returns home for its nonconference finale against Long Island on Saturday.

Florida plays Ohio in Tampa, one of two final tune-ups before SEC play.