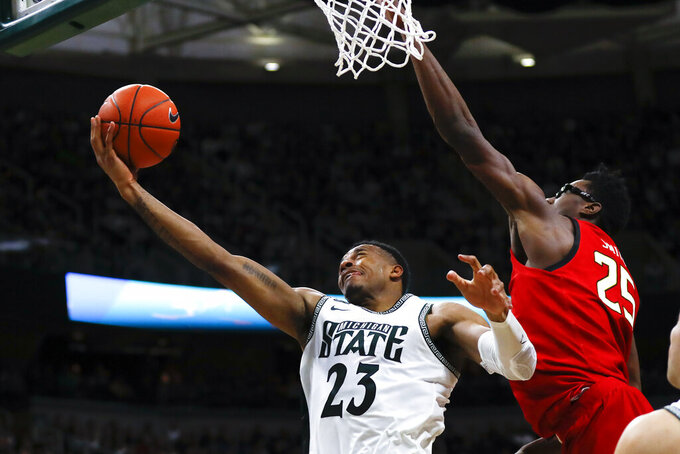 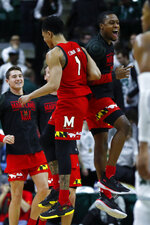 EAST LANSING, Mich. (AP) — Anthony Cowan was the smallest and best player on the court when it was time for No. 9 Maryland to rally for a win at Michigan State to stay alone in first place in the Big Ten.

Cowan scored 11 of his 24 points in the final two-plus minutes, helping the Terrapins beat the Spartans 67-60 with a strong finish Saturday night.

“He is as tough as they come, pound for pound,” Turgeon said.

Cowan had the last 11 points on three 3-pointers and two free throws. Jalen Smith finished with 17 points and 10 rebounds.

“That's four in a row for us on the road when everybody was wondering if we were ever going to win on the road," Turgeon said. “It means a lot whenever you beat Michigan state in this building."

Maryland was composed over the final minutes even when it trailed by seven points because it has a track record of coming back. It rallied from double-digit deficits to win five games this season, including one earlier this month against No. 20 Illinois.

The Spartans (17-9, 9-6) trailed by as much as 15 points in the first half and by eight early in the second half before making a surge to take a lead they could not keep.

Michigan State's Xavier Tillman had 18 points and 11 rebounds, but he gave Smith enough space to make a 3-pointer with 3:08 remaining to start Maryland's game-closing run. Tillman caught the wrath of Izzo after making the mistake on defense during the game, but the hard-driving coach was not as critical later in the night.

“Xavier was so tired and he didn't get out (to defend Smith)," Izzo said. “I would just say they made a good play and we had a blown coverage."

Cassius Winston had 14 points for the Spartans, who didn't have another player ready and able to make shots late when he was swarmed by more than one defender.

“You got to do that," Turgeon said.

Michigan State's new football coach, Mel Tucker, fired up fans during the first half in a timeout break. The crowd roared again during halftime when Michigan State honored its 2000 national championship team.

Maryland: With eight straight wins, the Terrapins have a one-game lead over No. 13 Penn State in the conference standings.

The Terrapins may move up a little in the poll. The Spartans became the first preseason No. 1 to drop out of the poll since Kentucky during the 2013-14 season and they will be unranked for at least another week.

Maryland grabbed one more rebound than Michigan State after having a huge advantage in the first half.