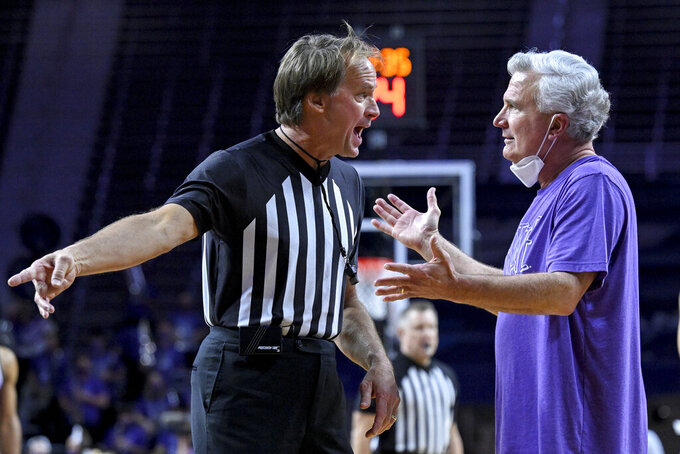 Kansas State coach Bruce Weber talks to one of the officials during the second half of the team's NCAA college basketball game against West Virginia in Manhattan, Kan., Monday, Feb. 14, 2022. (AP Photo/Reed Hoffmann) 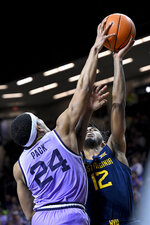 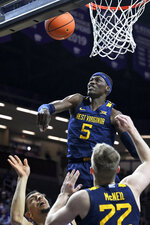 MANHATTAN, Kan. (AP) — Markquis Nowell scored 14 of his 21 points in the second half, Mark Smith notched his seventh double-double and Kansas State rallied to beat West Virginia 78-73 on Monday night.

Taz Sherman, who entered the game second in the Big 12 with an 18.4 scoring average, had 15 first-half points to guide West Virginia to a 42-35 lead at intermission.

Isaiah Cottrell buried a 3-pointer to begin the second half to stretch the Mountaineers lead to 10. Kansas State battled back and moved ahead 55-54 on a layup by Nijel Pack and a go-ahead free throw by Selton Miguel with 11:26 remaining.

Sherman made two free throws 13 seconds later to put West Virginia up one, but Nowell answered with a layup and then nailed a 3-pointer following a Mountaineers turnover to give K-State a 60-56 lead with 9:46 left. They never trailed again.

Sherman's jumper with 2:28 left pulled West Virginia within a point, but Ismael Massoud made three free throws after being fouled on a 3-point try and Nowell sank 1 of 2 with 1:02 to go to cap the scoring.

West Virginia beat Kansas State 71-68 in Morgantown in early January. The Mountaineers have won just 2 of 11 games since.

K-State hits the road to play Oklahoma State on Saturday. West Virginia heads back home to play No. 6 Kansas on Saturday.