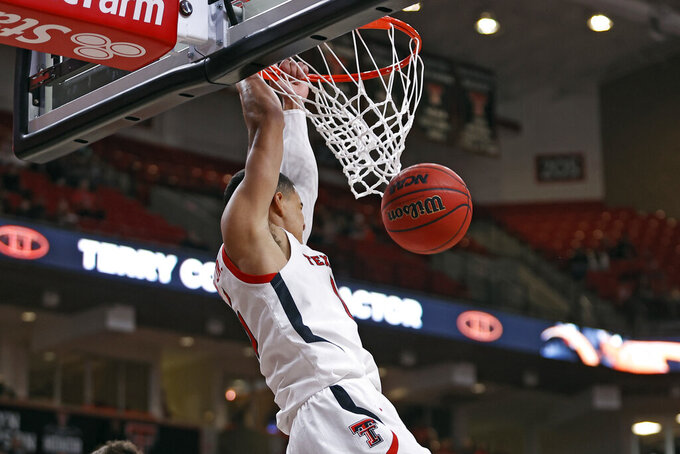 Texas Tech's Kevin McCullar (15) dunks the ball during the first half of an NCAA college basketball game against Eastern Washington on Wednesday, Dec. 22, 2021, in Lubbock, Texas. (AP Photo/Brad Tollefson)

Adonis Arms and Bryson Williams each had 12 points for the Red Raiders (9-2), who used several big runs to rebound from their loss Saturday to fourth-ranked Gonzaga. Kevin McCullar added 10 points and five assists.

“Coming into the Christmas break, I know guys are ready to go home and celebrate the holidays with their families,” Williams said. “So we just all came out with the mindset we were ready to fight, and ready to take care of business and be able to have a Merry Christmas.”

It also will be some extra time for starting guard Terrence Shannon to rest after missing his second game in a row because of back spasms. Guard Mylik Wilson missed his third consecutive game after what coach Mark Adams described as a minor surgical procedure on the junior's knee.

Rylan Bergersen had 10 points on 3-of-15 shooting for Eastern Washington (6-6), which entered the game with five players averaging double-figure scoring.

“Not the best night to have an off-shooting night, or day,” Eagles coach David Riley said.

The Red Raiders then outscored EWU 38-14 the rest of the half, including runs of 10-0 and 16-2. They made eight of their first nine shots in the game, including a 3 by Arms on their next possession after Allegri’s quick spurt.

“Those last eight, 10 minutes of the first half were rough for us defensively,” Riley said. “It’s a tough way to go home, and it’s a tough loss to go home on. And we've got to understand that we’re not good enough right now to go beat a Top 25 team, but we have a ton of room to grow as a program.”

Texas Tech, who shot 59% overall (29 of 49), went more than five minutes after halftime before a field goal by Marcus Santos-Silva, but had a 13-0 run midway through the second half.

Eastern Washington: The Eagles had 12 newcomers on this year's team, and their starting lineup had four of them — three transfers and a true freshman. The other starter was Steele Venters, a second-year freshman. ... Eastern Washington is 0-11 against Big 12 teams, including a 93-84 loss to Kansas in the first round of the NCAA Tournament last March.

Texas Tech: Adams wanted the Red Raiders to do a better job inside, and they outscored Eastern Washington 22-0 in the paint before halftime, and finished with a 40-4 advantage. ... Texas Tech got 12 players in the game, and all but one of them scored.

Eastern Washington was held 33 points below its Big Sky-leading 79.6 points per game, though was only one short of its average of nine made 3-pointers per game. The Eagles were the third team held to under 50 points by Texas Tech, which also allowed only 52 to Tennessee in an overtime victory two weeks ago.

The Red Raiders will go into 2022 in the Top 25. A loss last week didn't knock them out of the poll, and this lopsided victory came in their only game before the final poll of the calendar year comes out next Monday.

Texas Tech: Home against Alabama State in another midweek day game next Tuesday.