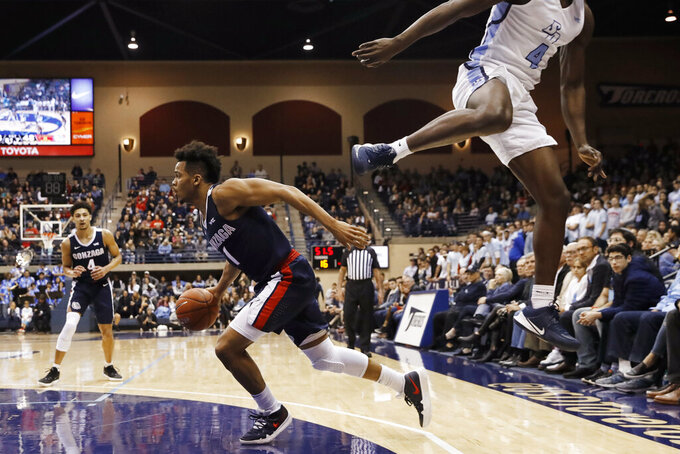 SAN DIEGO (AP) — The top-ranked Gonzaga Bulldogs had their swagger back after looking flat during the opening weekend of West Coast Conference play.

Joel Ayayi scored 20 points and Filip Petrusev had 17 for Gonzaga, which sprinted past San Diego 94-50 on Thursday night in a laugher after playing two close WCC games.

With a smothering defense opening the way for a high-powered offensive show, the Zags raced to a 53-16 halftime lead.

“That was probably as good as our attention to detail has been with our scouting plan and reports and what we’re trying to do defensively, so the guys deserve a lot of credit," coach Mark Few said.

“It's important. When you're carrying that kind of ranking and that kind of whatever, you have to bring it. I don’t necessarily think we did the first weekend of league, so they did a much better job of mentally preparing and going out and sticking with the plan."

Admon Gilder scored 12 points and Corey Kispert had 10 for Gonzaga (17-1, 3-0), which won its ninth straight game since its only loss, to Michigan on Nov. 29 in the Battle 4 Atlantis in the Bahamas. Killian Tillie had 10 rebounds.

The Bulldogs had to come back in both of their previous WCC games, an 85-72 win at Portland in which they trailed at halftime, followed by a 75-70 home win against Pepperdine.

But they toyed with the Toreros, whose only highlight was taking a 1-0 lead when Hartfield made the second of two free throws 42 seconds in.

After that it was all Gonzaga. The Bulldogs simply overwhelmed the smaller, slower Toreros in making slam dunks, 3-pointers and fast-break layups while quickly pushing the lead into double digits.

Petrusev had 15 points in the first half, including a hook shot and a three-point play for the Bulldogs’ first points. They grabbed leads of 10-3 and 18-5, both of which prompted USD coach Sam Scholl to call a timeout. Gonzaga continued to pour it on, taking leads of 27-6 and 40-14.

“That was the big point of emphasis because the last two games and before, we usually come out a little sloppy and not ready to play," Petrusev said. “We just wanted to play defense good at the beginning and just come out ready to play. We played physically from the beginning and just put it on them and like always offensively, just do great shots and take care of the ball. It worked out for us. I think it was one of the better games."

Even the Zags’ misses were spectacular. Kispert fed Tillie as he swooped in for a dunk, but the ball bounced off the rim.

The next time down the floor, Kispert hit a 3-pointer. Later in the half, Ryan Woolridge fed Anton Watson and his dunk attempt bounced off the rim.

Woolridge made a pretty stutter-step layup and Kispert closed the half with a 3-pointer just before the buzzer.

“We hold ourselves to a high standard and we clearly didn’t meet that in the first couple of weeks," Kispert said. “We were getting on ourselves and getting on each other. When you come here and you want to play a certain brand of basketball and you don’t live up to that, it’s disappointing. Coming out tonight and playing the way we did was big."

“We didn't have some shots go down early and that rattled us."

The highlights for Gonzaga continued in the second half. Petrusev had a monster slam dunk a minute in and then drained a 3-pointer from in front of the Zags’ bench for a 63-25 lead with 13:23 to go. He smiled, turned and pointed to the bench, and his teammates pointed back.

The Bulldogs came in with six players averaging double figures in scoring. Gonzaga was leading the nation in offense at 88.3 points per game.

Gonzaga: The Zags have a remarkable number of streaks going. They won their 30th straight regular-season conference game and their 34th conference road game in a row. They were coming off their 32nd consecutive home win.

Gonzaga heads up the freeway to play at Loyola Marymount on Saturday afternoon.