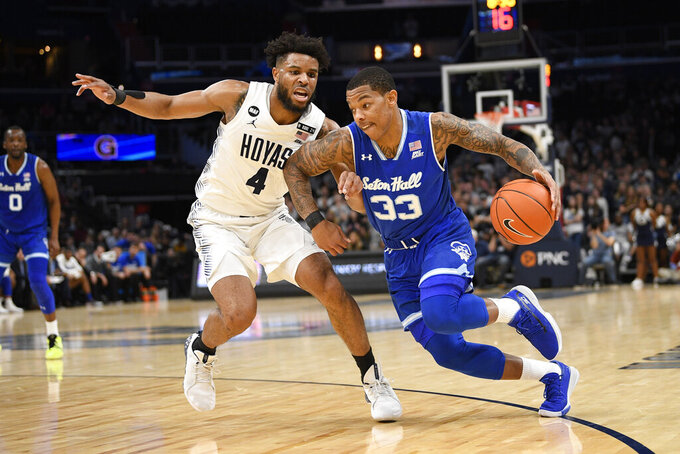 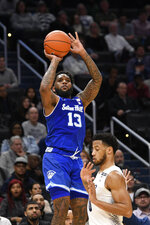 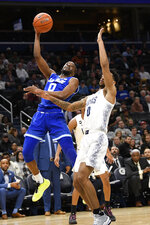 WASHINGTON (AP) — Preseason All-America player Myles Powell was determined to get off to a hot start after struggling to find his shot recently for No. 12 Seton Hall.

Georgetown proved to be the perfect opponent for him again.

Powell scored 34 points, Romaro Gill tied a career-high with eight blocks and the 12th-ranked Pirates raced out to a big lead and beat Georgetown 78-71 Wednesday night.

He was a combined 13 for 40 in wins over Providence and DePaul and a loss to Xavier.

“He was just disappointed,” Seton Hall coach Kevin Willard said. “I think he puts a lot of pressure on himself to play a certain way.”

Powell finished 12 for 24 from the field. He has averaged 29 points in Seton Hall’s last five games against Georgetown dating to last season.

Seton Hall's Quincy McKnight started the game and finished with eight points and a game-high 10 assists in 22 minutes. He was listed as day to day after leaving Saturday’s loss to Xavier early with a left knee injury.

The Pirates improved to 5-0 on the road in the Big East. They have won nine of 11 against Georgetown.

Georgetown (13-10, 3-7) was playing for the second straight game without leading scorer Mac McClung, who was out with an injured right foot.

Hoyas coach Patrick Ewing said that he’s hopeful McClung can play on Saturday against DePaul. The Hoyas are 1-2 in conference games without McClung this season.

Omer Yurtseven led the Hoyas with 19 points and 15 rebounds, his 13th double-double of the season. Georgetown's Jahvon Blair had 18 points while Terrell Allen added 11 points.

Seton Hall held Georgetown to 33.8% shooting as Gill had eight of the Pirates 11 blocks. The Hoyas stayed in the game by hitting 21 of 24 free throws, but could never contain Powell for any extended period of time.

“We tried everything,” Ewing said. “We tried to mix our defenses up, (had) a couple different guys on him. He had it rolling.”

Seton Hall: The Pirates responded to their first conference loss of the season by earning the season sweep of the Hoyas. They increased their lead in the Big East to two games thanks to the win and No. 10 Villanova losing earlier Wednesday at No. 19 Butler. With a healthy McKnight, Seton Hall can focus on jockeying for a top seed in what would be a fifth straight NCAA Tournament under Willard.

Georgetown: The Hoyas have faded in Big East play after a building a solid resume in the non-conference with victories over Power 5 schools Syracuse, Oklahoma State and then-No. 22 Texas. With four losses in five games, Georgetown is in serious danger of missing a fifth straight NCAA Tournament if it doesn't turn its season around quickly.

In two games against Georgetown this season, McKnight has 20 assists and just four turnovers.

Seton Hall: Travels to Villanova on Saturday in the first meeting of the season between the top teams in the Big East. The Pirates last won at Villanova in 1994, losing 17 straight.

Georgetown: The Hoyas host DePaul on Saturday in the first meeting of the season. They two schools have split the season series in each of the past three seasons.