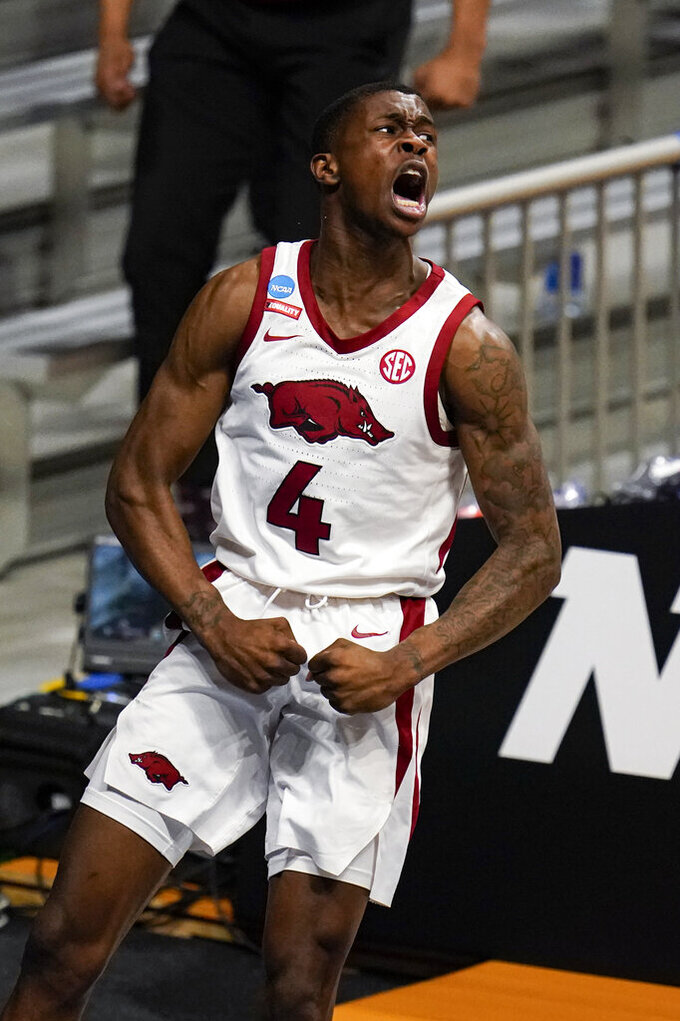 Arkansas guard Davonte Davis (4) reacts after a dunk against Texas Tech in the second half of a second-round game in the NCAA men's college basketball tournament at Hinkle Fieldhouse in Indianapolis, Sunday, March 21, 2021. (AP Photo/Michael Conroy)

Baylor was unbeaten and speeding through the stacked Big 12 when the most dreaded news for any team during this pandemic-altered season was delivered.

Due to coronavirus protocols, all activity was put on pause. After six postponements and three full weeks without a game, the Bears were predictably rusty before rediscovering their rhythm. The timing of the hiatus just might have been beneficial.

One month after returning from a long COVID-19 break, Baylor is back in the Sweet 16.

“When the pause hits your first instinct is, ‘We’re in trouble,’ and especially a 21-day one,” coach Scott Drew said after the No. 1 seed Bears defeated Wisconsin on Sunday in Indianapolis to reach the regional semifinals. “When you’re away from the game for three weeks, you’re watching everyone else play, it makes you hungrier to be back together and to be playing.”

Baylor (24-2) will face No. 5 seed Villanova (18-6) on Saturday, after getting 16 points and eight assists from Davion Mitchell and turning the ball over only four times against the defense-driven Badgers in a 76-63 victory.

The Wildcats used a 3-point shooting clinic to dominate North Texas 84-61 and keep the Mean Green from duplicating their overtime takedown of No. 4 seed Purdue.

The No. 15 seed Golden Eagles flew back from an 11-point deficit past the midpoint of the second half to overtake Florida 81-78 for a spot in the other South Region semifinal set for Saturday. They'll play No. 3 seed Arkansas, which outlasted Texas Tech 68-66 in their second round slugfest.

Oral Roberts, which has only been this deep in the NCAA Tournament once before, a regional final appearance in 1974, is only the second No. 15 seed to reach the Sweet 16. The Golden Eagles, who beat No. 2 seed Ohio State in the first round, were not exactly stunned by their historic achievement.

“Honest to goodness, I told the guys all year that, ‘Not only are we going to win the conference tournament, but we’re going to win multiple games in the NCAA,’” said coach Paul Mills, who was an assistant on Drew's staff with the Bears from 2003-17.

The Golden Eagles fans who were fortunate enough to be part of the socially distanced crowd at Indiana Farmers Coliseum took care of the hugging, jumping and shouting on site. The bigger gathering at the Mabee Center, the team's arena in Tulsa, Oklahoma, served as the official rally at the fired-up campus, strobe lights and all.

“It’s such a good feeling to know that you have family that wants to see you succeed,” said Kevin Obanor, who led Oral Roberts with 28 points and 11 rebounds.

That included Sam McCants, a star of that upstart 1974 team that beat Syracuse and Louisville before falling to Kansas, one game short of the Final Four. McCants watched the game with a nephew and a friend at his home in Pensacola, Florida.

“They’re right where we were. You come from a smaller school, no-name players, no All-Americans. I’m so proud of them,” McCants said in a phone interview with The Associated Press.

The trio jumped up out of their chairs when the final buzzer sounded. Then McCants' phone started to blow up.

“Everybody was calling me,” he said.

Eric Musselman could relate to that. In his second year at Arkansas, he has the Razorbacks back in the Sweet 16 for the first time since 1996.

“It’s a historic program with incredible fans. Getting this far, I can’t describe it. I just feel so fortunate to coach student-athletes like this. Their chemistry is so good. They genuinely love each other. They love playing with each other,” Musselman said. “It means a lot to them, and it means a lot to their parents and to their friends that live in the state.”

Musselman got some grief this season for a nonconference schedule that was on the lighter side, but guess who Arkansas beat on Dec. 20? The Golden Eagles, who had a 10-point halftime lead before the Razorbacks took control down the stretch.

“Man, if you're playing in a Sweet 16 game, you better be ready to play," Musselman said.