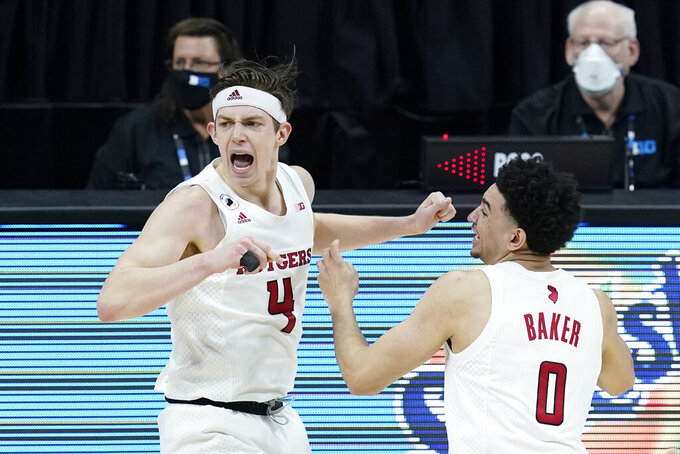 Rutgers' Paul Mulcahy (4) celebrates with Geo Baker (0) after Mulcahy hit a shot during the second half of an NCAA college basketball game against Indiana at the Big Ten Conference tournament, Thursday, March 11, 2021, in Indianapolis. (AP Photo/Darron Cummings) 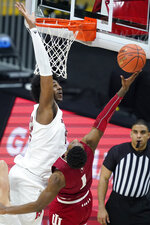 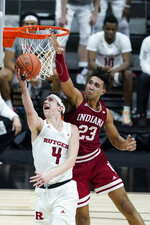 INDIANAPOLIS (AP) — Ron Harper Jr. and Jacob Young scored 13 points each as Rutgers knocked tenth-seeded Indiana out of the second round of the Big Ten Tournament on Thursday, 61-50.

Rutgers (15-10) was seeded seventh into the tournament, its highest seed ever, and will square off against second-seeded, and No. 3-ranked, Illinois (20-6) in a Friday quarterfinal. Rutgers beat the Illini 91-88 in their only meeting this season.

Trayce Jackson-Davis scored 19 points to lead Indiana, but six came after halftime. He threw down consecutive dunks midway through the second half, each time cutting the Rutgers lead to three, and he also blocked two shots down the stretch.

Aljami Durham added nine points, two after halftime as Indiana's shooting fell off to 28% after the break (8 of 29).

Armaan Franklin lifted Indiana to a 48-47 lead with just under 10 minutes left, but Young scored with a jumper to give the Scarlet Knights the lead for good and consecutive 3-pointers from Paul Mulcahy boosted Rutgers ahead 55-48 lead by the final TV timeout with 3:14 remaining.

The Hoosiers, meanwhile, went scoreless for 6:36 as Rutgers inched away. Indiana missed nine shots in a row and also whiffed on a pair of free throws before Durham sank two from the line with 2:35 remaining.

Caleb McConnell put an exclamation point on Rutgers' third win over Indiana this season with his fast-break dunk with 43 seconds left after Harper rebounded an Indiana miss.