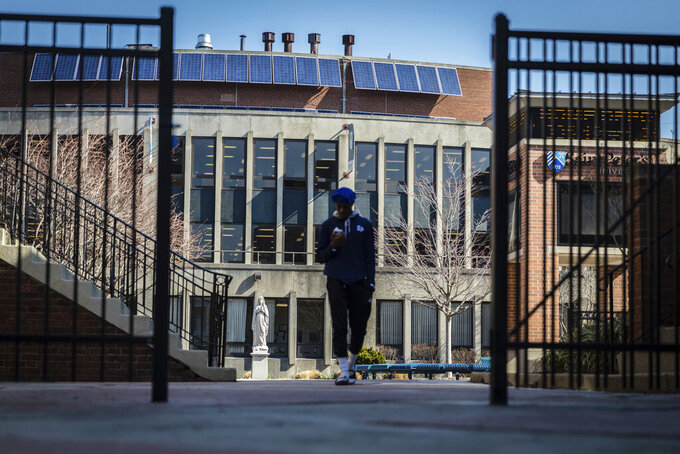 A student walks through the St.Peter's University campus on Friday, March 18, 2022 in Jersey City, N.J. Everyone was buzzing about tiny Saint Peter's University Friday after its stunning NCAA college basketball tournament upset win of second-seeded Kentucky except maybe Saint Peter's University. Students and staff were savoring the No. 15 seed Peacocks’ 85-79 overtime win. But Fridays are typically quiet on the Jersey City campus, and that was unchanged even after the feat that destroyed untold numbers of tournament brackets showing second-seeded Kentucky in the winner’s box.(AP Photo/Stefan Jeremiah)

Sure, students and staff were savoring the No. 15 seed Peacocks’ 85-79 overtime win. But Fridays are typically quiet on the Jersey City, New Jersey, campus, and that was unchanged even after the feat that destroyed untold numbers of tournament brackets showing second-seeded Kentucky in the winner’s box.

It wasn't that way Thursday night, when a watch party drew a big crowd, Kaylie Morris, a junior majoring in biology, said.

“It was a lot of people and they were supportive, very supportive,” she said. “And it was loud.”

The 150-year-old Jesuit school isn’t generally known as a rabid basketball school — at least it wasn’t as the Peacocks headed into their fourth appearance in the tournament since the 2010-11 season. This was the Metro Atlantic Athletic Conference champion’s first NCAA tournament win.

“A lot of people doubted. I don’t think anybody believed that a little school in Jersey City would do so well,” John Johnson Jr., an assistant professor of history, said. “But Coach Shaheen Holloway is an excellent coach and he had his team trained up pretty well, and those young men executed.”

Eduardo Pinto, a junior majoring in criminal justice, said he had so much confidence in Saint Peter’s that he bet a friend the team would score more than 80 points. “I always have faith in Saint Peter’s. I know a couple of them. They work hard and everything. I knew they were going to beat Kentucky.”

“Even though they’re not here physically, we knew they were here with us, like, spiritually,” he said at a news conference Friday in Indianapolis, where the game was played.

The only Jesuit, Catholic university in New Jersey has about 3,000 students, roughly 2,100 of them undergraduates and most from New Jersey. Its 30-acre campus sits across the Hudson River from New York City.

A few dozen students gathered for a pep rally later Friday ahead of Saturday’s second-round matchup with the Murray State Racers.

“This puts us on the map,” student Cliff Achokas said. “You know, Jersey City is oftentimes overlooked because of its proximity to New York City. But I think this is a great, great way to make noise for our city, for people to know who we are and what we’re about.”

Morris, the Saint Peter's biology major, said the university has a lot going for it besides basketball. “The classes are really small. It’s very personal. If you need help you’re not in a big class where the professor doesn’t even know you.”

As for that Peacock mascot, the university's website says that was the idea of the Rev. Robert Gannon, then dean, who chose it in 1930, symbolic of the resurrection in the Catholic tradition.