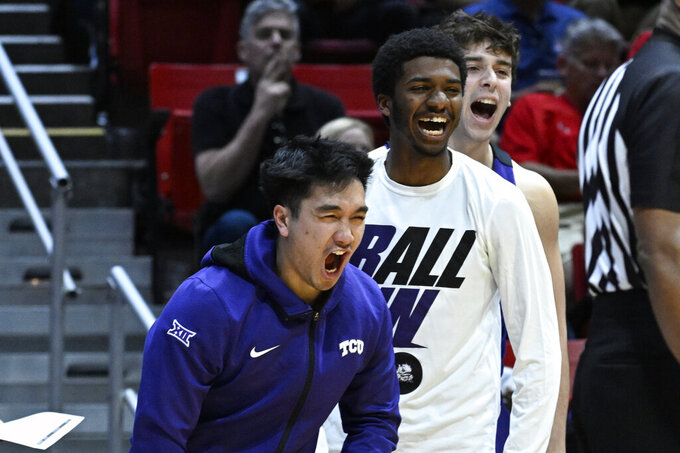 TCU players react on the bench during the first half of a first-round NCAA college basketball tournament game against Seton Hall, Friday, March 18, 2022, in San Diego. (AP Photo/Denis Poroy) 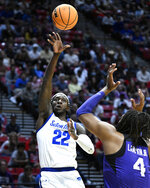 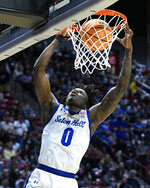 The Horned Frogs' last tournament victory was in 1987 against Marshall, when coach Jamie Dixon was a senior at his alma mater. They haven't had many opportunities since: This was their third appearance since 1988 and second in Dixon's six seasons.

“Well, I can’t do anything about the last 35. I’ve been saying that for a while,” said Dixon, who led Pittsburgh to 11 NCAA trips in 13 years. “We’ve done good things since we’ve been back. Hopefully this is the start of more to come.”

Damion Baugh scored 14 points for TCU, which shot 27 of 53 (50.9%) from the field and led most of the game. It also dominated inside, outscoring Seton Hall 40-14 in the paint. Sixteen of TCU's 27 field goals were layups.

“We got them in foul trouble early, which made them hesitant on the offensive end with their attack,” said Emmanuel Miller, who had 10 points. “I think going forward that’s a huge thing in what we need to do because we realize how important it was to do that today.”

The Horned Frogs (21-12) will take on the South Region's top seed, Arizona, on Sunday in the second round. The Wildcats defeated Wright State 87-70 earlier Friday.

Jamir Harris and Myles Cale each scored 11 points for Seton Hall (21-11), which shot 28.8% from the field, its worst performance in an NCAA Tournament game. The Pirates' previous worst shooting game was 32.3% against Gonzaga in a 2016 first-round loss.

“I thought they were much more physical than us. I thought they got into us really early in the game, kind of shook us, to be honest with you,” coach Kevin Willard said.

Jared Rhoden was held to four points and fouled out in what is likely his game for Seton Hall. The first-team All-Big East guard came into the game averaging 15.9 points.

“I just think TCU is a very physical team. They rebounded the ball very well. They were very well prepared, very well coached,” Rhoden said. “The guard play was actually better than I thought. They got some big dudes on their team.”

A 3-pointer by Harris got the Pirates within 12-11 before the Horned Frogs went on a 12-1 run that included six points by Miller. Seton Hall missed eight straight shots and was held without a field goal for 5:43 as it started 5 of 24.

Willard, who has been at Seton Hall for 12 years, has been mentioned as a candidate for the opening at Maryland. Asked about those rumors, he didn't deny them. He also endorsed his possible replacement.

“I have an agent who I haven’t talked to yet. But when I get home I’ll talk to my agent and discuss things with my agent,” he said. “I’ll be honest with you. If I’m not here next year, I’d love, if Shaheen Holloway is here, that would be the happiest thing to happen to me.”

Holloway played at Seton Hall and was an assistant on Willard's staff. He left to become the coach at Saint Peter's and led the 15th-seeded Peacocks to the biggest upset of the first round, a win over Kentucky on Thursday.

TCU: Dixon improved to 8-4 against Seton Hall, with the previous 11 games coming when he was Pittsburgh's coach.

Seton Hall: The Pirates had some late-season momentum with six straight wins before dropping their final two.

Dixon is looking to get TCU to the Sweet 16 for the first time. He made three trips there with Pittsburgh and reached the Elite Eight once, in 2009.