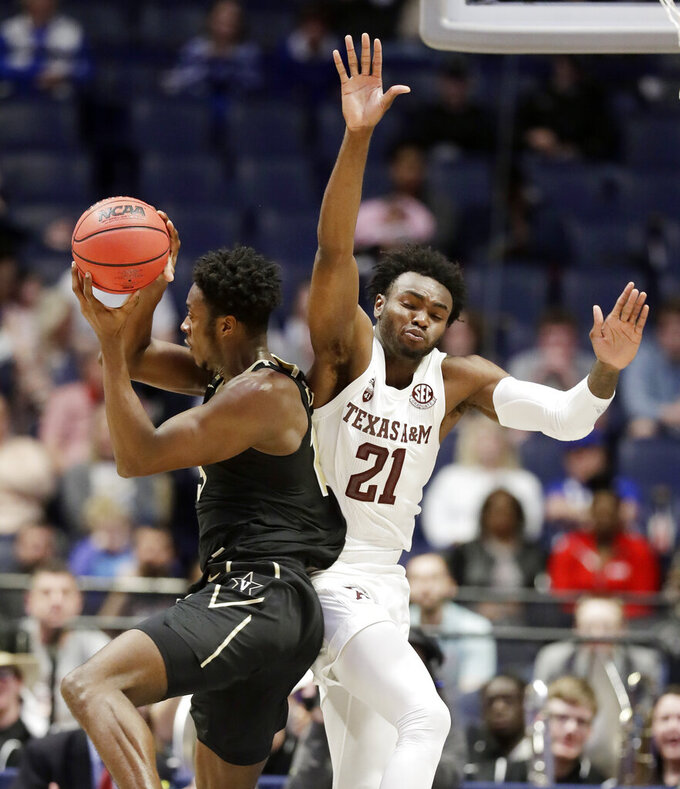 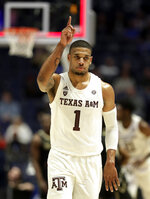 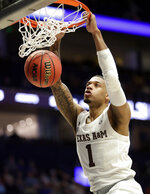 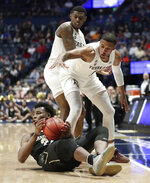 NASHVILLE, Tenn. (AP) — The Texas A&M Aggies finally have a victory at the Southeastern Conference Tournament after leaving empty-handed each of their past two trips.

Savion Flagg scored 17 of his career-high 29 points in the first half, and 11th-seeded Texas A&M beat Vanderbilt 69-52 Wednesday night in the opening round of the Southeastern Conference Tournament to keep coach Billy Kennedy around for at least another game.

Last year, the Aggies lost on a buzzer-beater to Alabama and Vanderbilt the year before that. Even though Flagg and Chandler are both sophomores, they're the only Aggies to play in this tournament before and they knew how long it had been.

"So coming in here and just getting a win, we're just going to keep it going, just keep the momentum going through the tournament," Aggies guard Jay Jay Chandler said.

Texas A&M (14-17) snapped a two-game skid in a struggling season that has put Kennedy's tenure at risk after eight seasons and 151 wins. The Aggies will play No. 6 seed Mississippi State in the second round Thursday night. Aggies junior Josh Nebo said Kennedy's demeanor didn't change despite reports that the coach will be fired at season's end.

Texas A&M advanced by running over a team mired in an even worse season.

Vanderbilt (9-23) never led and added to the worst season in school history with a 20th straight loss. The Commodores already went through the SEC schedule as the first team in 65 years without winning a single game. They turned in the first losing record in 67 seasons at Memorial Gym, and being a couple miles away at Bridgestone Arena didn't help.

Coach Bryce Drew's job status also is in question after a combined 43 losses over the past two seasons, the latest to a team Vanderbilt lost to on March 2 in Texas by just seven points. Drew said he'll meet with new athletic director Malcolm Turner after the season.

"There's definitely some things that we recognized several months ago, some necessary changes that needed to happen," Drew said. "We've already been working on those changes and will continue to work on those changes."

Chandler had 13 and Nebo added 11 for the Aggies.

Saben Lee led Vanderbilt with 19 points. Yanni Wetzell had 10 points and 10 rebounds and said the skid hurts a lot.

"It's going to be a long offseason," Wetzell said.

Christian Mekowulu hit a jumper within the first minute, and Flagg added a jumper as Texas A&M took control from the opening tip. Lee scored four straight to tie it up for Vanderbilt. Chandler's layup with 15:42 left put the Aggies ahead to stay, and he followed with a 3-pointer as Texas A&M built its lead to as much as 15 on Flagg's jumper for a 34-19 halftime lead.

Texas A&M took its biggest lead on a dunk by Nebo nearly midway through the half at 50-31. Then Vandy put together its best run of the game at 13-2, and Aaron Nesmith's 3 with 6:23 to go pulled the Commodores within 53-43. They never got closer than 10 down the stretch.

Vanderbilt: The Commodores at least extended their streak with a made 3-pointer to 1,063 games , a streak that was in serious doubt after they missed their first 12 attempts. Matt Ryan knocked down a 3 with 17:48 left to keep Vanderbilt with UNLV and Princeton as the only programs to hit a 3 in every game since the 3-point line was added for the 1986-87 season. Ryan finished 1 of 8 beyond the arc, and Vandy was just 3 of 23.

Texas A&M: The Aggies were in such control that Kennedy was able to able to rest Flagg a bit after the guard had played all 40 minutes of two of the past three games. The sophomore came in leading the SEC in minutes played averaging 34.6 minutes per game and still played 35 minutes.

Vanderbilt: A decision on whether Drew gets a fourth season.

Texas A&M: A rematch with Mississippi State after losing to the Bulldogs in the regular season finale.