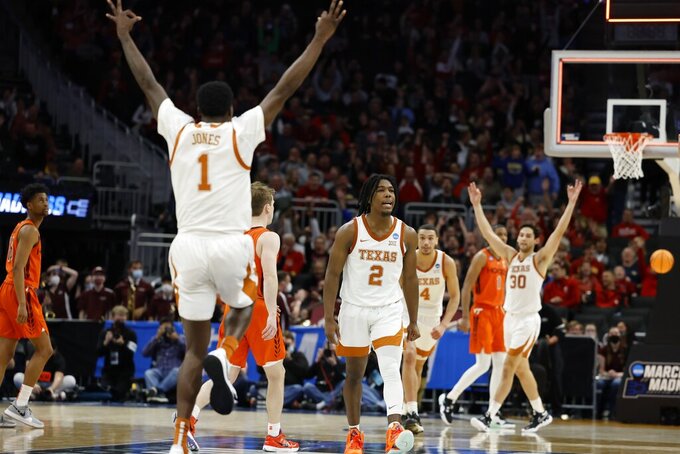 Texas's Marcus Carr celebrates after making the final shot in the first half of a first round NCAA college basketball tournament game against Virginia Tech Friday, March 18, 2022, in Milwaukee. (AP Photo/Jeffrey Phelps) 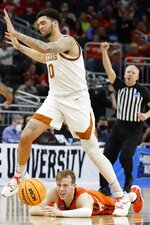 MILWAUKEE (AP) — Texas’ Marcus Carr says he doesn’t leave the gym on most practice days until he makes at least one halfcourt shot.

Practice made perfect for Carr on Friday.

Carr beat the halftime buzzer by banking in a shot from roughly 60 feet away to put Texas ahead for good in an 81-73 victory over Virginia Tech that gave the Longhorns their first NCAA Tournament victory since 2014.

The sixth-seeded Longhorns (22-11) advance to a second-round East Region game Sunday against No. 3 seed Purdue (28-7). The Boilermakers trounced Yale 78-56 on Friday.

“Just so happy for our guys that never won a game in a tournament, never been in the tournament,” Texas coach Chris Beard said. “This whole deal’s about our players. I think after the season it will be a chance to reflect, but we’re in this tournament to win six games.”

After Virginia Tech’s Storm Murphy made two free throws with 2.1 seconds left in the first half to give the Hokies a 32-31 lead, Carr got about one-third of the way up the court before firing away.

Carr had taken just a couple of steps beyond the 3-point arc on the opposite end of the floor and hadn’t even reached the “S” on the “March Madness” logo when he launched his shot.

"Anybody who knows me knows I shoot that shot a lot," said Carr, who had 15 points, nine assists and only one turnover. “It wasn’t really a surprise when it went in.”

Carr's coach vouched for him.

“He was able to get two dribbles and get a pretty high-percentage shot,” Beard said. “It’s not a 50% shot, but for Marcus that might be a 20% shot. He can make one out of five from that area.”

Texas built on the momentum and led by 17 with 5 1/2 minutes left. Virginia Tech's Hunter Cattoor sank a 3-pointer with 45 seconds left to cut Texas' lead to 76-69, but the Hokies couldn't get any closer.

Andrew Jones scored 21 points to lead five Texas players in double figures as the Longhorns shot 10 of 19 from 3-point range. Timmy Allen had 14, Christian Bishop 11 and Courtney Ramey 10 to go along with Carr's 15.

The Longhorns ended a five-game NCAA Tournament losing streak. They were seeking to improve those postseason fortunes last year when they hired Beard, a former Texas student manager who led Texas Tech to the national championship game in 2019.

Virginia Tech's Sean Padulla scored 19 points, with 13 coming in the last 4 1/2 minutes. Keve Aluma had 15 and Cattoor added 12 as Virginia Tech lost for just the third time in 16 games.

The 11th-seeded Hokies (23-13) had played their way into the NCAA field by winning their first Atlantic Coast Conference Tournament title last week.

“At the end of the day when you look at the big picture, when you look back, we’re the first team at Virginia Tech to ever be ACC champs, so no one will ever be able to take that away from us,” Cattoor said. “The relationships we build with each other and the coaching staff, it’s more about life, it’s not all about basketball. The relationships we take away from this, growing as humans, I’ll be forever grateful for it.”

Heading into this game, Virginia Tech was ranked third in 3-point percentage (.393), while Texas was ranked 250th (.323). Yet the Longhorns outscored the Hokies 30-12 from beyond the arc as Virginia Tech went 4 of 12 on 3-point attempts.

Texas: Beard overhauled his roster by bringing in plenty of transfers, and those newcomers made an impact Friday. Carr played at Minnesota last season. Allen played at Utah. Creighton transfer Bishop scored 11 points. But it was a holdover from former coach Shaka Smart’s tenure who led the team in scoring. Jones shot 5 of 7 from 3-point range and had 17 points by halftime.

Virginia Tech: This marks the second straight first-round NCAA Tournament loss for the Hokies, who fell to Florida in overtime last season. ... In the second half, the Hokies had nine turnovers and allowed Texas to shoot 64% from the floor.

Texas will be trying to reach the Sweet 16 for the first time since a 2008 regional final appearance when it faces Purdue on Sunday.