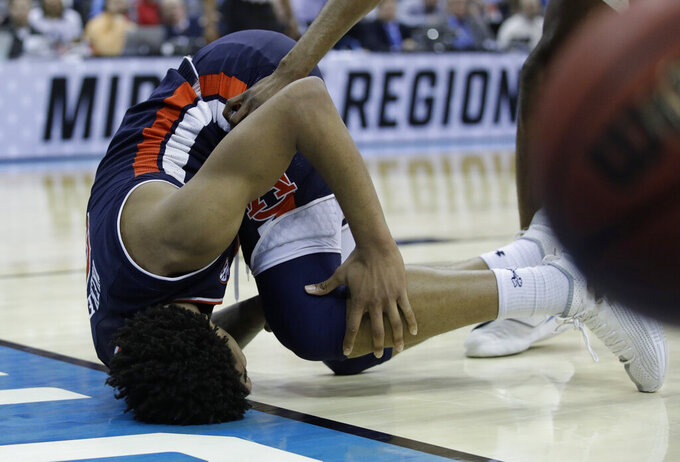 Auburn's Chuma Okeke grabs his leg after being injured on his way to the basket during the second half of a men's NCAA tournament college basketball Midwest Regional semifinal game against North Carolina, Friday, March 29, 2019, in Kansas City, Mo. (AP Photo/Charlie Riedel)

A coaching matchup for the ages highlights Sunday's regional finals in the NCAA Tournament.

Izzo looks forward to competing against his longtime friend.

"We know that Duke is the No. 1 overall seed. And they've earned all their stuff, too, with the way that program has been, Coach K and the players," Izzo said. "So hopefully it will be as good as a game as the billing."

History favors Duke against Michigan State — the Blue Devils have won nine of the past 10 and seven straight in the series, including a victory in the 2015 Final Four. Krzyzewski downplayed it on Saturday.

"You play the team that you're going to play against right now," he said. "And they're capable of handing us a defeat. It doesn't make any difference what's happened in the past, really."

In Sunday's other regional final, Kentucky faces Auburn in the Midwest.

Duke has been up to the challenge in close wins over Central Florida and Virginia Tech.

"Playing the entire game until the end is the thing, and then you accept the outcome," Krzyzewski said. "And, obviously, the outcome has been good for us or else I wouldn't have the pleasure of spending time with you all today."

Duke freshman Zion Williamson has scored 80 points in the NCAA Tournament, the most of any freshman in his first three games. Another freshman, RJ Barrett, is the team leader with 22.7 points per game.

"They're very aggressive and physical and they rebound the ball very well," Williamson said. "And they have a great motor. So they're a great team. Their bigs are very great as well. So we're just going to have to try our best to contain them."

Krzyzewski said Saturday that freshman forward Cam Reddish will be a game-time decision with a knee injury. Reddish averages 13.6 points per game.

"I just feel like it just goes back to having the chip on our shoulder," Auburn guard Bryce Brown said. "Once we took a few losses midway through the season, I felt like we wasn't — it wasn't the worst thing to happen for us. I feel like it opened our guys, woke us up a little bit."

Auburn will be without Chuma Okeke, who tore his left ACL in the win over North Carolina on Friday night. Dr. James Andrews is scheduled to perform the surgery Tuesday.

"It's just hard to take in," said Brown, Auburn's scoring leader. "I mean Chuma, he doesn't deserve that at all. He worked so hard, spent so much time in the gym and making sure his body is right. It's our jobs to pick him up, lift him up, encourage him, and all we want to do at this point is go out there and play for him. We're going to use it as motivation."