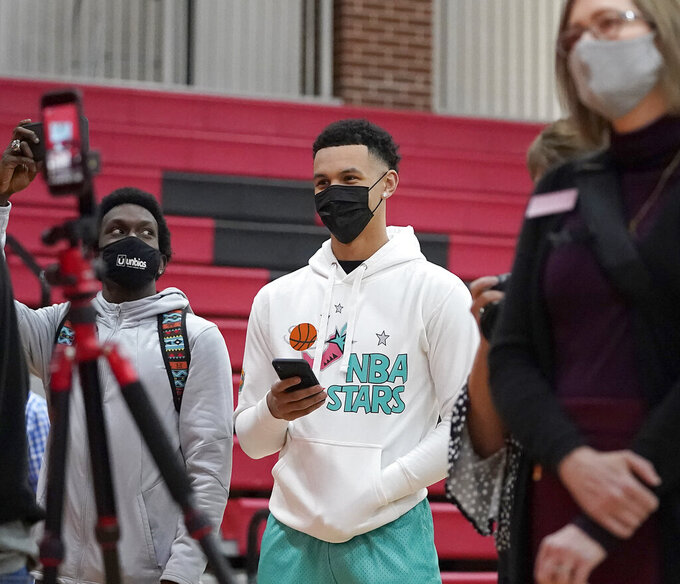 SPOKANE, Wash. (AP) — Chet Holmgren, the nation's top overall recruit, announced he is heading to Gonzaga on the same day star guard Jalen Suggs announced he is leaving the Bulldogs after one season to enter the NBA draft.

Holmgren said on ESPN that he will play for the Bulldogs. He will likely play only one college season.

“It was their consistent approach, how versatile they are on the court and their offensive style,” said Holmgren. “They take their talent and tweak their system based on their personnel. They know how to put it all together.”

Holmgren combines the skills of a guard with a 7-foot-1 frame and has been projected to be the No. 1 overall pick in the 2022 NBA draft.

Holmgren is following in the footsteps of Suggs, a close friend who is also from Minnesota.

Suggs had a stellar freshman season, capped off by hitting one of the most memorable shots in Final Four history, a buzzer-beating 3-pointer against UCLA that sent Gonzaga into the national championship game. The Zags lost to Baylor in the title game.

Suggs announced in a Twitter post that he will enter the draft, which was anticipated since he's considered a top pick.

"Super excited, can’t wait to take this next step in my journey,” Suggs said during an interview on ESPN. "It’s something I’ve dreamed about since I was a little kid. I’m ready to get going.”

Suggs, who played with Holmgren at Minnehaha Academy and on AAU teams, was previously the highest-rated recruit in Gonzaga history. He was 11th in 247sports’ composite rankings when he committed to the Zags and 10th in the final rankings for the 2020 class.