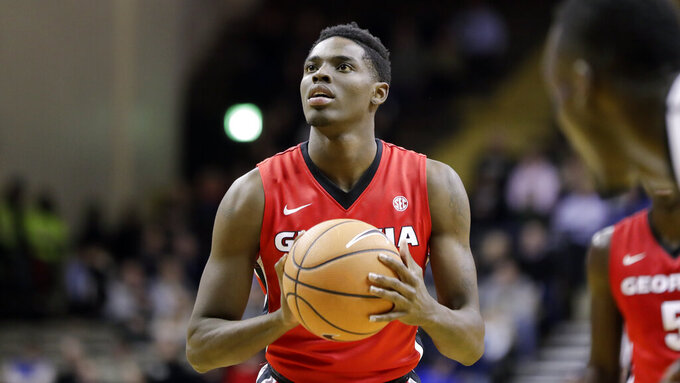 MCDONOUGH, Ga. (AP) — A Tulane University basketball player who recently declared for the NBA draft is charged with murder and other counts in a Georgia slaying.

He was one of six people wanted in connection with an April 8 homicide in Stockbridge, Georgia, Henry County police said in a Facebook post Friday. Police spokesman Capt. Randy Lee told the Atlanta Journal-Constitution that the victim, Devante Anthony Long, died from gunshot wounds after he was taken to a hospital.

Jail records show that five of the six men are now in police custody, including Hightower’s brother, Jeffrey Hightower.

On the day of the shooting, Teshaun Hightower posted a tweet that said “God protect my people.”

Tulane “immediately dismissed” Hightower from the basketball program after learning about his arrest, athletic director Troy Dannen said in a statement.

Hightower, 22, said he was entering the NBA draft pool on April 18, just 10 days after Long's death. In his announcement on Twitter, the junior guard noted he planned to maintain the option of returning to school with a year of eligibility left.

The 6-foot-5 Hightower, a native of Lithonia, Georgia, averaged 15.9 points, 4.6 rebounds and 2.4 assists per game during the 2019-20 season, his only one at Tulane. He played the previous two seasons at Georgia before transferring.

Prior to college, Hightower attended Mt. Zion Prep near Baltimore.

It was not immediately clear whether he had a lawyer who could comment on his behalf. Jail records show he was scheduled to appear in court on Sunday.