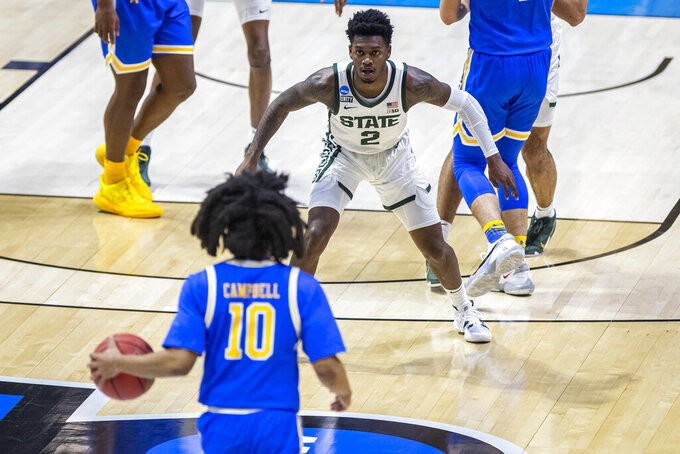 Michigan State's Rocket Watts (2) sets up on defense as UCLA's Tyger Campbell (10) brings the ball up during the first half of a First Four game in the NCAA men's college basketball tournament Thursday, March 18, 2021, at Mackey Arena in West Lafayette, Ind. (AP Photo/Robert Franklin)

WEST LAFAYETTE, Ind. (AP) — UCLA showed plenty of fight in its overtime win over Michigan State in a First Four game in the NCAA Tournament.

The Spartans showed some fight, too — among themselves.

After coach Tom Izzo and forward Gabe Brown carried a shouting match into halftime, the Spartans proceeded to blow an 11-point lead over the next 20 minutes. UCLA forced overtime on Jaime Jaquez Jr.'s three-point play with 3.3 seconds to go, then pulled away in the extra session for an 86-80 victory at Mackey Arena on Thursday night.

“The kids really needed this,” said Bruins coach Mick Cronin, whose team had lost four straight. “They've been battling hard. I was really concerned with their confidence being shook with what we've been through the last few weeks.”

The Bruins scored the first four points in overtime and led 83-80 when Cody Riley hit a foul shot with 26 seconds left. The Spartans' Josh Langford missed at the other end, and Jaylen Clark hit two more free throws to send the Bruins into a first-round game against No. 6 seed BYU on Saturday night at Hinkle Fieldhouse in Indianapolis.

Jaquez finished with a career-high 27 points, Johnny Juzang added 23, and Riley and Jules Bernard scored 11 apiece for the Bruins (20-7), who had lost to the Spartans (15-13) each of the past two seasons.

"My determination coming into this game," Jaquez said, “was just to do whatever it took to win.”

Aaron Henry led the Michigan State with 18 points, five rebounds and seven assists. Langford added 12 points and seven rebounds, though he missed a free throw in overtime and another shot in the final seconds.

“Just disappointed,” Izzo said. “We had the game won. We made some of the same mistakes we made two or three times this year, critical situations, and I thought we played incredibly well offensively and incredibly poor defensively.”

Both teams had a chance to end the game in regulation.

The Spartans regained the lead on Malik Hall's two free throws with 5 minutes to go, then stretched it to five moments later. But after the Bruins came all the way back, and Jaquez's three-point play knotted the game 77-all with 28.7 seconds left, the Spartans' Rocket Watts shot an airball on a 3-pointer with 3.3 seconds remaining on the clock.

The Bruins inbounded the ball and got it to Juzang, whose heave from the midcourt line bounced off the rim.

“We came out and had a great run, and that's one thing we said before the game: We have to sustain the run we are able to create,” Langford said. “Credit to UCLA, they played great tonight.”

Indeed, just about everything went right for Michigan State in the first half: It used two big runs minutes apart to establish a lead, then slowly extended it over the final 10 minutes, forcing Cronin to burn through two timeouts.

The Spartans' 11-point lead would have been more had Brown not blown a defensive assignment on Jaquez, allowing him to hit a buzzer-beating jumper. Izzo stormed out to yell at Brown, the junior forward roared back at his Hall of Fame coach, and Izzo tugged on the back of his jersey as the two continued shouting all the way up the tunnel.

“He missed a play and I told him. He walked away and I told him to come back,” Izzo said. “It was a normal thing. Just this day and age, everything is something. It was over a missed switch that we had talked about.”

The Bruins took advantage of the suddenly off-kilter Spartans.

With John Wooden's retired Purdue jersey looking down from the rafters, the program he built into a dynasty went on a 10-2 run early in the second half. The Bruins got 3-pointers from Jaquez and Juzang, clamped down on defense and for a long stretch would have made the Wizard of Westwood proud on both ends of the floor.

They did most of it with starting forward Riley sitting with four fouls, too.

Once overtime came around, Juzang hit the first two baskets of the extra session to give UCLA the lead. Riley was back on the floor for a crucial free throw and the Bruins held on to win in their 50th appearance in the NCAA Tournament.

“There was no tournament last year, it was taken away from the kids. I speak for all coaches, it's nice to have the kids get a chance to do that,” Cronin said. "It's a big step forward for us, but we have more work to do.”

UCLA won despite playing at Michigan State's tempo for most of the night. A big reason was the 9-for-18 clip the Bruins had from the 3-point line, along with matching the more physical Spartans on the boards all night.

Michigan State was 16 of 18 from the foul line but missed one in overtime. It only committed 12 turnovers but two of those came in overtime. In other words, the Spartans made crucial mistakes when it mattered the most.

The Bruins will play the sixth-seeded Cougars on Saturday night in Indianapolis. They have split 24 matchups with BYU, losing the most recent matchup in November 2019 at the Maui Invitational. They also split their four NCAA Tournament games, with UCLA winning in 1965 and 1971 and the Cougars winning in 1950 and 1981.