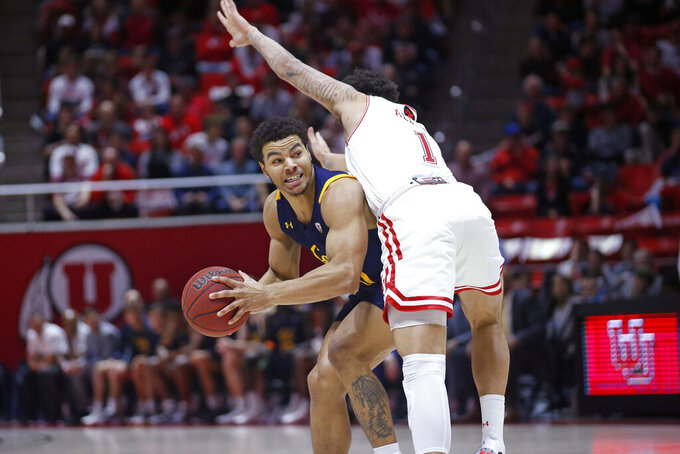 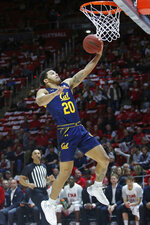 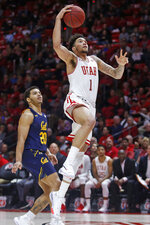 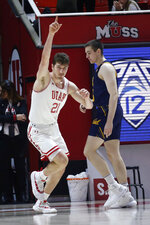 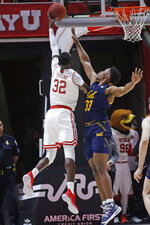 SALT LAKE CITY (AP) — Finding his shot has largely been a chore for Timmy Allen since the start of Pac-12 play. Allen took a step forward on resolving those shooting struggles.

The sophomore forward scored 21 points on 8-of-16 shooting to help Utah beat California 60-45 on Saturday night. Allen had his first 20-point game since the Utes' Pac-12 opener against Oregon State. Once he found a rhythm, Allen accounted for 14 of Utah's final 20 points.

Allen had his first performance of shooting 50% or better from the field since Utah's win over Kentucky in December.

“Man, I've been missing shots I should make and I still did today, truthfully,” Allen said. “But it feels cool. I've got a lot more work to do."

Allen has faced persistent pressure in the form of double teams. At times, it has taken him out of his game and compelled him to force up low-percentage shots. The sophomore wrote a different chapter against the Bears.

He stayed strong in getting to his spots and, once the basket opened up for him, his confidence soared.

“I think it's just what I do,” Allen said. “I don't think it's what the defensive team does. I was just more strong today. Just played without stress and played free, truthfully."

“We just played like a tired team,” California coach Mark Fox said. “They were the aggressors and we didn't finish enough plays. You have to score when you're on the road and we didn't do that tonight.”

Utah built a double-digit lead multiple times in the first half after taking advantage of a pair of prolonged shooting droughts by California.

The Bears went 3 ½ minutes without scoring a basket, allowing Utah to rip off a 12-2 run and take a 17-6 lead. Riley Battin and Rylan Jones made back-to-back baskets to punctuate the spurt.

Paris Austin keyed a temporary surge with back-to-back layups. Kareem Story followed with a 3-pointer that made it 17-14. Then California went cold again, missing five straight shots and failing to score over a four-minute stretch.

Utah did not waste the opportunity to pull away again. Alfonso Plummer made back-to-back baskets and Battin buried a 3-pointer to extend Utah's lead to 24-14.

California had a chance to rally when the Utes missed 8 of 9 shots to open the second half. The Bears could not overcome their own offensive struggles long enough to get back into the game. They closed to within 36-28 on Andre Kelly's layup before going 3 ½ minutes without scoring.

Utah finally found a spark behind a pair of layups from Mikael Jantunen that fueled a 12-5 run. Branden Carlson buried a jumper to cap the run and give the Utes a 48-33 lead with 6:51 remaining.

California: Too much inconsistency on offense doomed the Bears. California shot just 32% from the field and endured too many long stretches without a point at critical junctures.

The Utes moved to 10-1 at home this season and have now won four straight in their own arena. Finding success on the road has been a whole different story. Utah is 1-6 in true road games and has not won on the road since beating Nevada in the season opener.

It has to change if the Utes want to make a push into the top half of the Pac-12 standings.

Utah has held three of its last four opponents under 40% field goal shooting. California made just 16 baskets — the lowest for a Ute opponent this season. The Bears led just once and their inability to make shots prevented them from making up any ground as the game progressed.

California hosts No. 23 Arizona on Thursday.