Villanova breezes past Delaware 80-60 in NCAA 1st round 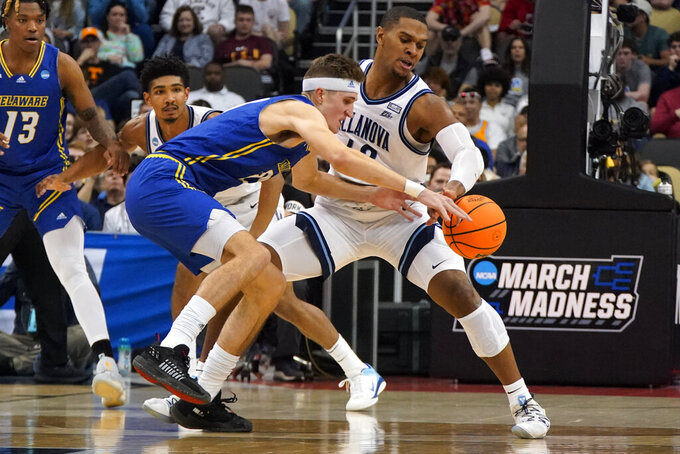 Villanova's Eric Dixon, right, steals the ball from Delaware's Andrew Carr during the first half of a college basketball game in the first round of the NCAA tournament in Pittsburgh, Friday, March 18, 2022. (AP Photo/Gene J. Puskar) 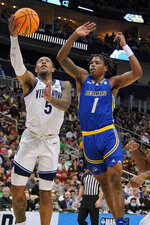 PITTSBURGH (AP) — Villanova's hangover from another Big East title lasted maybe 10 minutes. Once the Wildcats found their footing, they ran away from scrappy Delaware.

Justin Moore scored 21 points, Collin Gillespie added 14 and second-seeded Villanova had little trouble with the 15th-seeded Blue Hens, breezing to an 80-60 victory in the first round of the NCAA Tournament on Friday.

The Wildcats (27-7) used a 35-10 surge spanning the end of the first half and the start of the second to turn an eight-point deficit into a blowout. Villanova will meet Ohio State in the second round of the South Region on Sunday. The No. 7-seeded Buckeyes downed Loyola Chicago 54-41 in the first of four games at PPG Paints Arena.

Villanova coach Jay Wright worried about his team's legs after watching conference rivals Marquette and UConn flame out of the NCAAs quickly during first-round losses on Thursday.

The Wildcats, not so much. While Delaware (22-13) showed some early fight against its northern neighbor in a meeting of programs separated by 43 miles on the map and considerably more in the college basketball landscape, it wasn't nearly enough.

Villanova overwhelmed the Blue Hens under a barrage of 3-pointers to begin the school's quest for a third national title in seven seasons.

“I think over the course of the game, we decided to get a feel for what (Delaware) wanted to do, and we got comfortable with making plays for each other, and that’s what it’s all about,” said Wildcats forward Jermaine Samuels, who had 15 points and nine rebounds.

Jyare Davis led Delaware with 17 points but over the course of 40 minutes, Villanova exposed the considerable gulf between schools that are bitter rivals in several sports, just not basketball.

Jameer Nelson Jr., the son of the former Saint Joseph's and NBA star who regularly battled the Wildcats as part of the city's Big Five, was limited to eight points on 3-of-13 shooting.

“(We) put a little scare in them,” Delaware coach Martin Ingelsby said. “I think the end of the first half and early part of the second half they were able to extend that lead and we were battling uphill from there.”

Early on, the Colonial Athletic Association champion Blue Hens didn’t show any nerves or fear against one of the sport's bluebloods.

Graduate forward Dylan Painter, who began his career at Villanova, gave Delaware an early 15-8 lead, easing any anxiety that the stage would be too big. Guard Kevin Anderson made it a point to drink in the moment. Maybe a little too much.

“As soon as we started appreciating it, they started hitting 3s,” Anderson said. “I think we appreciated it too long.”

Gillespie got Villanova on track with a pair of 3-pointers, Samuels and Daniels added one each and the Wildcats closed the first half with a 13-2 burst to take a 35-25 lead into the break.

Villanova's momentum carried over to the second half. Moore poured in 12 points in the first five minutes — including three 3-pointers — as the Wildcats' advantage quickly ballooned to 20 points. Delaware would not get within 16 the rest of the way.

Villanova assistant Dwayne Anderson, a captain on the 2009 Wildcats team that reached the Final Four, had to be helped off the floor after getting slammed into by Samuels while Samuels was chasing down a loose ball with the Wildcats up big late in the second half.

Asked if maybe he could have eased up with the Wildcats comfortably in front, Samuels shook his head.

“That’s not what we do here at Villanova,” Samuels said. "We’re going to play a full 40 (minutes) no matter what’s going on around us.”

President Joe Biden filled out his brackets, picking Delaware over Gonzaga in the final to win the NCAA Tournament. No surprise, he’s a proud alum.

“I’m proud of all the athletes competing in this year’s NCAA tournament,” he wrote on Twitter. ”But at the end of the day, I’m a @UDelaware guy. Go Blue Hens!"