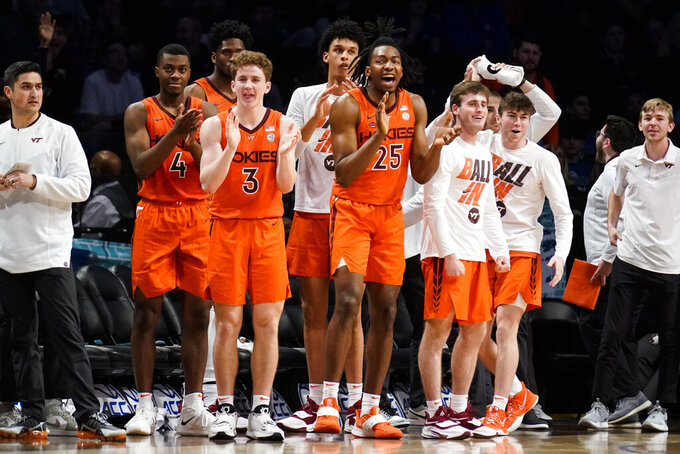 NEW YORK (AP) — Virginia Tech came to Brooklyn a desperate team, in need of a run in the Atlantic Coast Conference Tournament to have a chance to make the NCAAs.

Now the Hokies have the opportunity to eliminate any doubt.

Darius Maddox, Keve Aluma and Virginia Tech dominated No. 25 North Carolina 72-59 on Friday night to advance to the ACC championship game for the first time — and prevent another matchup between the Tar Heels and rival Duke.

The Hokies will try to become the second team to win the ACC Tournament with four victories in four days. The other was Duke in 2017, the first time the tournament was played at Barclays.

Virginia Tech is a relative newcomer to the conference, having joined in 2004. The Hokies have won four football ACC championships, but have been unable to break through the Blue Bloods in basketball.

Third-year coach Mike Young's team has been rolling since losing five games in January. The Hokies have won 12 of 14 to put themselves in position to win an ACC championship and maybe earn an NCAA at-large bid no matter what happens against Duke.

“We’ll win tomorrow if we can defend and if we can rebound,” Young said. “Will be a tall order.”

The Hokies opened the second half with a 9-0 run on a three-point play by Aluma and back-to-back 3s by Hunter Cattoor and Justyn Mutts that upped the lead to 41-26.

The Tar Heels (24-9), looking to return to the ACC title game for the first time since 2018 and set up a rubber match with Tobacco Road rival Duke for the championship, never mounted a real threat.

Maddox, who made a 3 at the buzzer to stave off elimination against Clemson on Wednesday night, dropped an open 3 and held the follow-through to give the Hokies a 20-point lead with 12:47 left against North Carolina.

The Tar Heels made a mini-run to cut the lead to 11 with a 9:25 left. About a minute later Maddox converted a four-point play that pushed the margin back to 17 and quashed any lingering Tar Heels hopes.

Armando Bacot had 19 points and 14 rebounds for the Tar Heels.

Virginia Tech: Hokies fans were clearly outnumbered by Duke and North Carolina supporters at Barclays Center on Friday night, but as the arena emptied in the final minutes they took over the place.

They gave Young a huge cheer as he left the court and he pumped his fist to the band as he headed to the tunnel.

North Carolina: The Tar Heels' inconsistent season continued. First-season coach Hubert Davis had stressed to his team that good performances needed to be validated the next time out with similar effort.

North Carolina seemed to be hitting its stride, following up a victory against Duke to end the regular-season with an efficient effort against Virginia on Thursday night.

Against the Hokies, aside from Bacot, it was another dud from the Heels.

Davis said he stressed to his team that they should still be encouraged with the way they ended the season winning 12 of 15.

“That's a team of perseverance, of fight,” he said.

Bacot added: “We’ve done a good job all year responding to the adversity.”

Virginia Tech: The Hokies lost to Duke to open the ACC season in December.