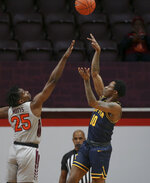 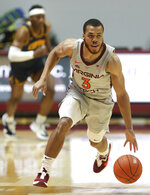 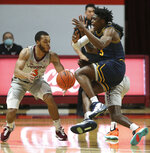 It was the second straight win for Virginia Tech (6-1), which beat No. 24 Clemson on Tuesday after its 20-point loss to Penn State in the ACC/Big Ten Challenge on Dec. 8.

The Hokies were a season-best 20 of 37 from 3-point range, with eight players hitting at least one. They made 11 from distance against Radford and attempted 27 against VMI.

They led the Atlantic Coast Conference last season with 315 made 3-pointers.

Alleyne and Cone were a combined 12-of-23 shooting from the field. Keve Aluma added 12 points and Hunter Cattoor had 11, and each made a pair of 3s for Virginia Tech. Cattoor also had five assists.

Virginia Tech entered as the only team in the ACC with two wins over ranked teams this season. They also beat then-No. 3 Villanova, 81-73 in overtime on Nov. 29. The Hokies face Longwood on Monday and continue conference play hosting Miami on Dec. 29.