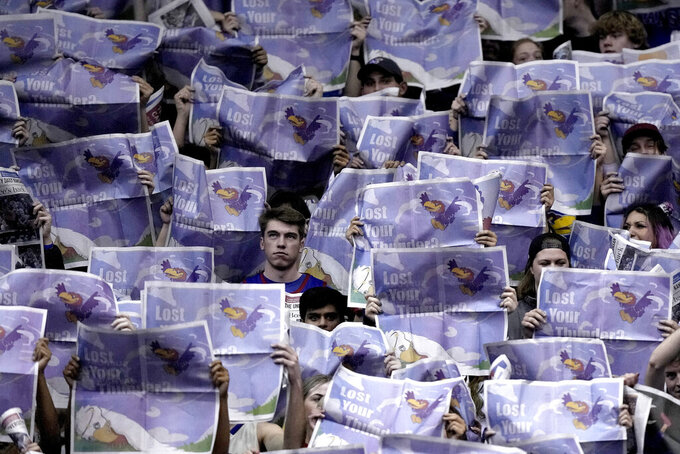 LAWRENCE, Kan. (AP) — Jalen Wilson scored a career-high 33 points and No. 6 Kansas survived a letdown against Southern Utah, hanging on for an 82-76 victory on Friday night.

Wilson set a career best for a second straight game after scoring 25 points in the Jayhawks' 69-64 win over No. 7 Duke in Indianapolis on Tuesday night. The Thunderbirds (3-2) didn't figure to provide as tough a challenge, but they hung with Kansas (4-0) until the final minute at Allen Fieldhouse.

“He was terrific,” interim coach Norm Roberts said. “He was really efficient. He made some big plays for us.”

That was about it for praise from Roberts after the game.

“We weren’t very good, but give them credit,” he said. “They played really well. They made some key shots. We were just off in everything we did.

“They played exactly how we thought they were going to play. We just didn’t have good body movement and we talked about that before the game. We had so many ill-advised turnovers that they did nothing to cause. We’ve got to clean up a lot of that.”

The Jayhawks had their biggest lead of the game, 77-69, with 2:11 remaining. Southern Utah responded with a 7-0 run, including five straight points by Tevian Jones, to get within one point with 1:03 left.

Gradey Dick's 3-pointer with 40.6 seconds remaining made it 80-76 and Southern Utah didn't make another basket.

“I knew it was a close game, obviously,” Dick said. “KJ (Adams) got the offensive rebound. I felt open and took the shot.”

Roberts coached his final game for Kansas in place of Bill Self, who served the last of his school-imposed four-game suspension stemming from recruiting violations first uncovered in a federal investigation.

He said he's not concerned about how the Jayhawks will respond to their close call.

“We always turn negatives into positives,” he said. “I know Coach (Self) can’t wait to get into practice and get that started. It’s always good when you can get a win and learn from a win, rather than learning from a loss.

“Tonight was definitely one of those games.”

The Jayhawks got 18 points from Dick and 14 from Dajuan Harris.

Southern Utah outrebounded Kansas 45-41, including 14-6 on the offensive glass. The Thunderbirds hit four of their first seven 3-point attempts to build a 22-16 lead in the first half. Wilson had the final two baskets before halftime to give the Jayhawks a 41-39 edge.

“I was just trying to get the ball moving and get to the paint,” Wilson said. “I didn’t want to settle for shots. That’s something we emphasized. We knew they didn’t have any shot-blockers, so we decided to attack the paint.”

Southern Utah: The Thunderbirds were not intimidated. They answered every early Kansas run and led in the final minute of the first half.

Kansas: The Jayhawks need another scorer besides Wilson and Dick. The duo scored 27 of the team’s 41 points in the first half and finished with 51 of the Jayhawks' 82.

Southern Utah: Heads to the Islands. The Thunderbirds will face Texas State next Friday in the opening round of the North Shore Classic in Laie, Hawaii.

Kansas: Plays North Carolina State Wednesday in the first round of the Battle 4 Atlantis in the Bahamas.