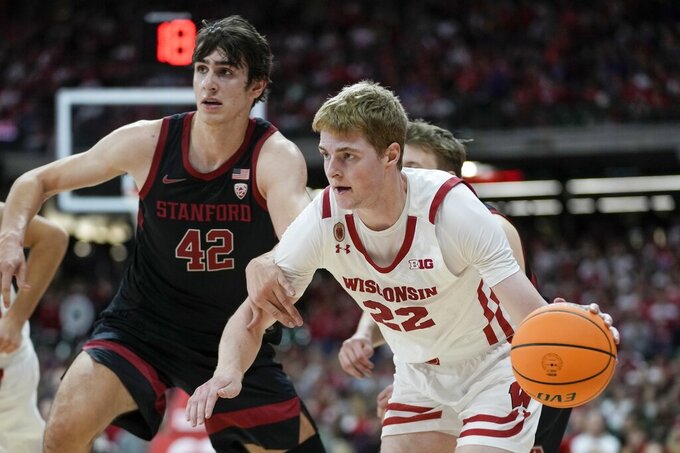 Wisconsin's Steven Crowl drives past Stanford's Maxime Raynaud during the first half of an NCAA college basketball game Friday, Nov. 11, 2022, in Milwaukee. The game is being played at American Family Field, home of the Milwaukee Brewers. (AP Photo/Morry Gash)

Jordan Davis had a career-high 13 points and Chucky Hepburn added 11 to help Wisconsin (2-0) win the first college basketball game at a baseball-only facility since a 2015 matchup between San Diego and San Diego State at Petco Park, the home of the San Diego Padres.

Badgers coach Greg Gard had tried for about 15 years to bring a game to the Brewers’ stadium, located about 80 miles east of Wisconsin’s campus. Billed as the “Brew City Battle,” Friday’s event was part of a doubleheader that started with a women’s basketball game that Kansas State won 77-63 over Wisconsin.

“I had fans grabbing me that I have no idea who they are, as I was walking down to the dugout and stuff, just so excited to be able to be part of this event,” Gard said. “It turned out better than we probably ever expected or imagined.”

American Family Field has a retractable roof that was closed for Friday’s games. The event had an announced attendance of 17,927 and included a combination of University of Wisconsin and Milwaukee Brewers traditions.

One timeout featured a version of the sausage race that happens in the seventh inning of Brewers home games. Another timeout had Wisconsin fans jumping along to House of Pain’s “Jump Around,” the same way they do back on campus.

The stadium was reconfigured for basketball by removing the pitcher’s mound and placing the court on the infield. About 400 bleacher seats were placed courtside, there were a few rows of chairs behind each basket and fans also filled portions of the stadium’s permanent stands.

“It was great, looking up in the stands and you see three or four levels filled with red,” Wahl said.

Steven Crowl had nine points and 11 rebounds for Wisconsin.

Wisconsin led 32-20 after a first half in which Stanford missed all nine of its 3-point attempts and had nearly twice as many turnovers (12) as baskets (7).

“I do think at the end of the day, we're going to have a fantastic 3-point shooting team and we'll be a very efficient offensive team,” Stanford coach Jerod Haase said. “Obviously that wasn't the case tonight. Certainly Wisconsin gets some credit for how they defended us.”

Michael Jones had nine points for the Cardinal three nights after the Davidson transfer had a career-high 31 in his Stanford debut, an 88-78 victory over Pacific. Maxime Raynaud, who scored 22 against Pacific, had just three points Friday.

Spencer Jones, who led Stanford in scoring last season, had eight points Friday after an injury kept him out of the Pacific game.