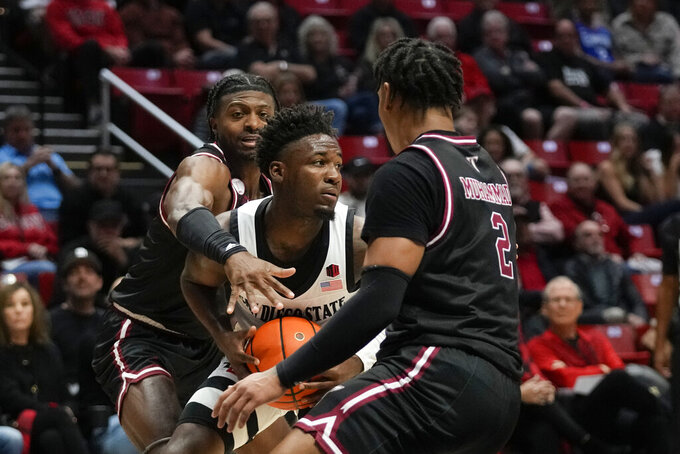 Darrion Trammell made a layup in traffic, converted two free throws and forced a key steal in the final three minutes to seal the win for the Aztecs (7-2).

“Another hard-fought game,” San Diego State coach Brian Dutcher said. “The schedule has been tough on us, there is no question about that. We knew Troy was good, they had our full attention.”

“Muhammad was dynamic,” Dutcher said. “He created space and shoots it. Whether we had a guard or a big on him, you weren’t doing anything about that.”

Both teams had been averaging about 80 points per game. Troy relied on a pesky defense to limit the Aztecs to 4-for-22 shooting on 3-pointers.

“Troy took away all of our entries, they do a great job denying,” Dutcher said. “We were 12 of 13 from the line, that is really good free throw shooting in a close game so that was part of the win.”

San Diego State’s defense limited the Trojans to 32.8% shooting for the game. The Aztecs shot 41.5% from the floor.

“The key to the game is Troy hit seven 3s in the first half and if they would have made seven in the second half they would have won, but they only made two,” Dutcher said. “We guarded like crazy tonight. … Our defense won the game.”

Troy played without guard Duke Miles and forward Nate Tshimanga, who were both in concussion protocol. Additionally, forward Lydell Geffrard left the game with an apparent right knee injury after playing only two minutes in the first half.

“We are grinding games out -- we have had a hard schedule. We have played a lot of great teams,” Trammell said. “But we are a tough group of guys, so it is going to pay off.”

The Aztecs won points in the paint versus Troy, 30-16, allowing them to get just enough offense to win.

“We our pulling out a lot of tough games,” Bradley said. “It’s been tough but I’m happy with our record and where we sit right now.”

Troy: Going into the game, Troy ranked 15th in the country in steals with 10.2 per game. The Trojans had seven steals against the Aztecs.

San Diego State: This was the second all-time matchup between the schools. The Trojans defeated the Aztecs 93-84 on Nov. 30, 2003, at Viejas Arena.

Troy hosts Tennessee Tech on Saturday. The Golden Eagles (3-6) have lost three straight games, including a 80-66 defeat at Butler on Saturday.

San Diego State travels to play at St. Mary’s (6-3) on Saturday. The Gaels have a three-game losing streak after starting 6-0, including a 75-65 win over Vanderbilt on Nov. 23.