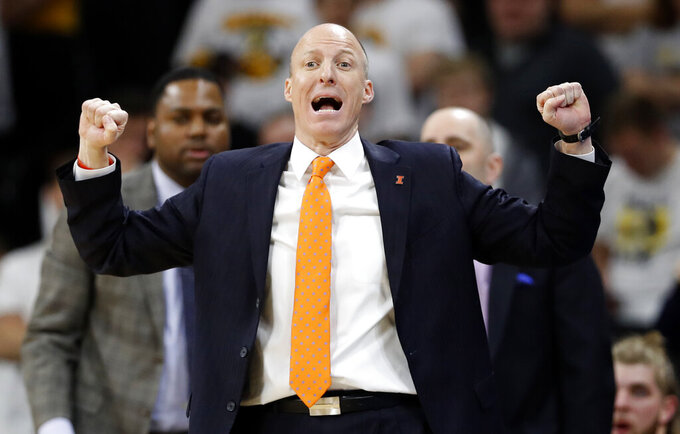 FILE - In this Feb. 18, 2017, file photo, then-Illinois head coach John Groce directs his team during the second half of an NCAA college basketball game against Iowa, in Iowa City, Iowa. Akron coach John Groce has agreed to a contract extension through 2026. Zips athletic director Larry Williams announced the agreement on Tuesday, March 30, 2021 with Groce, who just completed his fourth season at the school. Groce is 70-49 overall since he wad hired in 2017. The Zips are 26-10 in the Mid-American Conference over the past two seasons.(AP Photo/Charlie Neibergall, File)

Zips athletic director Larry Williams announced the agreement Tuesday with Groce, who just completed his fourth season at the school. Williams called Groce “a uniquely talented leader who has done and will continue to do a remarkable job.”

Groce is 70-49 overall since he was hired in 2017 by Akron after five seasons at Illinois. The Zips are 26-10 in the Mid-American Conference over the past two seasons.

Akron went 15-7 this season, losing in overtime to Buffalo in the MAC Tournament semifinals on March 12.

Groce averaged 19 wins per season with the Fighting Illini. Before going to the Big Ten Conference, Groce coached at Ohio and led the Bobcats to two NCAA Tournament appearances, including in 2012 when they made the Sweet 16.